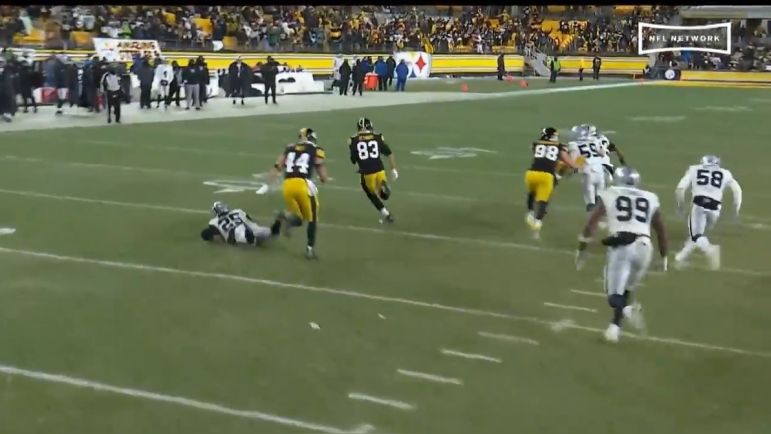 Pittsburgh Steelers offensive coordinator saved perhaps one of his best play calls of the season for the last play of Sunday’s game: a jet sweep to rookie tight end Connor Heyward. It’s a play they had never shown before on tape—a play Heyward never ran in college even, though he was a running back.

You don’t necessarily want to trust rookies in critical situations, but there has been a willingness. The Steelers closed out the first game of the 2020 season with a run by then-rookie wide receiver Chase Claypool as well.

They were confident in Heyward, however, including in his understanding of the game and situational football. He displayed that with his decision to just go down once he picked up the first down, knowing that it would end the game—no need to score, no getting out of bounds.

“In that situation if you have a little bit of football awareness you know what to do,” he told reporters this week about his play and his decision to go down, via Teresa Varley for the team’s website. “I could have run out of bounds, or even score, but get down, make sure we have the ball, possess the ball, because it will be over.”

Granted, looking at the play it’s extremely unlikely that he had much chance of scoring, but he could have kept fighting if he wanted to. And we’ve seen plenty of players in situations like these, unthinkingly, running out of bounds instead of taking a hit or having the wherewithal to give themselves up.

Connor Heyward to end it as part of a jet sweep out of a BEEFY 23 grouping. Perfect surprise call for personnel and formation. #Steelers #NFL pic.twitter.com/CLlugD8bkb

There were under 20 seconds left, so even though the Las Vegas Raiders still had two timeouts, the simple reality was that the game was over, provided that they didn’t do anything stupid, as long as they didn’t lose the ball, the game was over. But giving yourself up eliminates all risks.

Steelers safety Minkah Fitzpatrick showed the same intelligence when he picked off a Marcus Mariota pass against the Atlanta Falcons on the final meaningful play of the game a few weeks ago. He could have taken it into the end zone for a touchdown, putting Pittsburgh up by 10 with 35 seconds to play.

But that still leaves Atlanta with a chance, no matter how unlikely, that they could at least get a touchdown and a field goal in 35 seconds to take it into overtime. Run back a kick and then get an onside kick and you’re in business. Crazier things have happened.

“We won the game, we go home,” Fitzpatrick said after that game about his decision to give himself up rather than score. “I ain’t trying to pad the stats, nothing like that. I’m good with the win.”