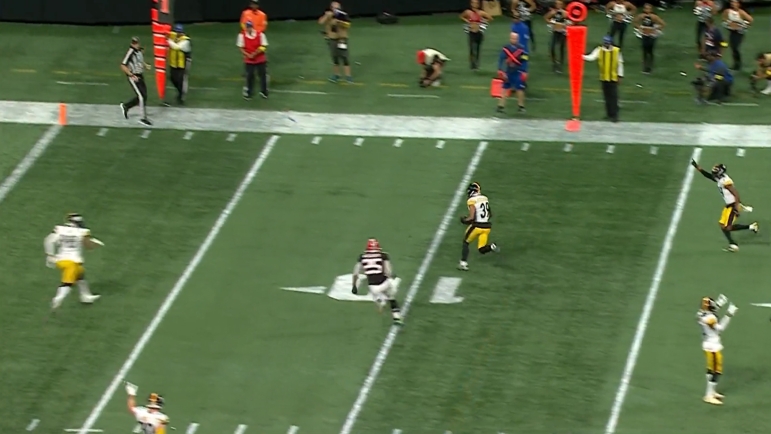 The Pittsburgh Steelers had a bit of a rollercoaster game in Atlanta today, but they finished the ride with a smile on their faces. Safety Minkah Fitzpatrick was a big reason why. He essentially finished off the game with a huge interception of Falcons quarterback Marcus Mariota and took the ball out of bounds, allowing the offense to end the game in victory formation.

He could have run it back for a pick six if he wanted to, which would have been his second of the year (and nearly third). He chose not to. And as you would expect, he was asked about why after the game, though he played a bit humble in his answer, not really acknowledging the football IQ aspect of the play.

Since entering the league in 2018, nobody has more pick sixes than Fitzpatrick with four tied with the Baltimore Ravens’ Marcus Peters. Three of them have come since he joined the Steelers in 2019, including one in the season opener against the Cincinnati Bengals.

As mentioned, he very nearly had a second interception returned for a touchdown back in week four against the New York Jets, picking off quarterback Zach Wilson, but he was ruled out of bounds at the four-yard line in spite of his diving attempt for the pylon when it initially appeared as though he got in.

That was his last interception of the season—his third—up until the final defensive play of today’s game, marking his fourth of the year and tying the number that he had for the Steelers back in 2020, one off his career high from a year earlier.

He also had a team-high seven tackles in the game, including a big tackle for a four-yard loss in a key moment against the Falcons, bringing down Cordarrelle Patterson deep in the backfield as the Falcons were marching down the field with the opportunity to take a lead. The setback resulted in them settling for a field goal.

Fitzpatrick now has 62 tackles on the season along with four interceptions, though thanks to his selfless decision not to allow the ball to go back into the Falcons’ hands, he is still stuck on just one defensive touchdown on the year—the Steelers’ only non-offensive touchdown in 2022.

Had he decided to return the interception for a score, it almost surely wouldn’t have changed the outcome, but doing so made the win a 100 percent certainty barring a spectacular failure of a kneeldown.

With one of the game’s best kick returners in Patterson, down 10 points, the Falcons could at least theoretically had a runback for a score and attempted an onside kick. The odds of that happening are low, but higher than zero. It’s a heads-up play on Fitzpatrick’s part, even if he says he really just didn’t want to have to play another snap.