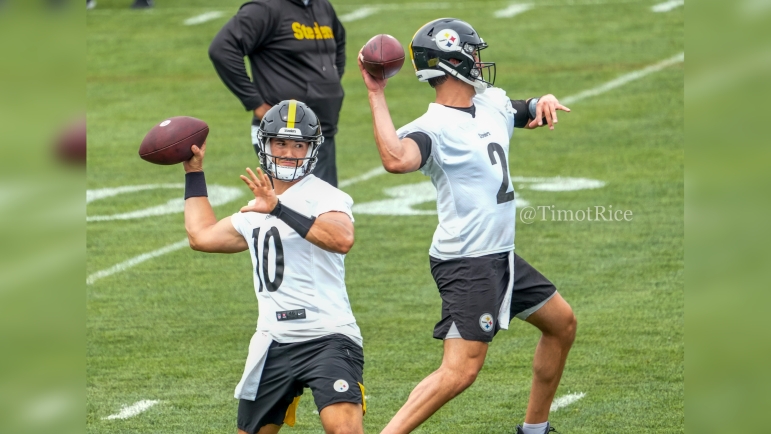 Mitch Trubisky or Mason Rudolph. I could’ve gone either way. Honestly. There’s a case to be made for either. Trubisky is a bit more aggressive, he’s been the backup, and his mobility makes some plays. But Rudolph might take better care of the football, play more within the Steelers’ structure, two key things Pittsburgh needs to secure victory. Whoever they picked was going to be a fine decision, a choice that can be rationed and defended. They ultimately landed on Trubisky and I’m not mad about that.

But their process? It stunk.

And I know. It’s Week 15. This is a 5-8 team. Win, lose, or draw, it doesn’t really matter big-picture. The Steelers aren’t making the playoffs. They’re going to have their first losing season of the Mike Tomlin era. The rest of the year is a focus on young pieces and potential building blocks for 2023 and beyond, a roster that’s unlikely to have either QB – Trubisky or Rudolph – on it. I’m going to complain about process and it’s a little like being on the sinking Titanic and yelling at the band for playing slightly out of key. We’ve got bigger problems.

But process is everything. It’s how an organization conducts itself. How it thinks, how it operates, and current process dictates and shapes future ones. And the Steelers did it all wrong this week.

Pushing away their usual “next man up” mentality, Mike Tomlin and the Steelers left their starting QB up for debate until Saturday afternoon, settling on Trubisky over Rudolph. There was a “competition” during practice, Trubisky and Rudolph splitting first-team reps, all for the team to stick with Trubisky.

Regardless of who they picked, the starter is hurt by a lack of full reps. They got 50% of the work a starter should receive. How much that will hurt them remains to be seen but it certainly doesn’t help. It doesn’t put whoever they picked in best position to succeed. And that’s what coaching at its most fundamental is all about. Putting your players in the best place to win. Pittsburgh didn’t do their job this week.

What was Pittsburgh looking for in a competition anyway? It’s veteran Rudolph versus veteran Trubisky. Rudolph is the same guy as he’s been. Ditto Trubisky. There wasn’t a young guy here the team wanted to take a longer look at. Both have big bodies of work and a couple days of practice wasn’t going to change that. The better course was to make a decision by Wednesday’s practice, give that guy full reps, and hope it all works out. Lead with confidence, not uncertainty.

Now that Trubisky is the guy tomorrow afternoon, is his approach going to change? Is he going to play scared, looking over his shoulder, worried that one mistake is going to cause him to get benched like it did in Week 4? Show faith in one guy, especially when it comes to quarterback, and do everything you can as an organization to help him succeed. There’s a time for battles and competition. In the spring, in the summer, that’s all fine. Not in Week 15 between two veteran guys.

The counter might be giving Rudolph a chance to get reps should Trubisky get hurt against the Panthers. But that’s not how teams practice. Trubisky wasn’t getting Kenny Pickett’s reps just in case Pickett got hurt. Your starters work with the 1’s. Sure, Rudolph could’ve picked up a few snaps here or there during the week as a “just in case” plan but there was no need to split them down the middle. Rudolph’s a veteran guy whose come off the bench before and if he’s called upon tomorrow, you trust his experience. Pickett came off the bench in Week 4 with zero reps and held his own and that was his first NFL action. Rudolph would’ve survived. And though it’s the NFL, you have to feel for the guy. Rudolph is Charlie Brown and the Steelers’ “competition” is Lucy holding the football. Rudolph keeps running up and the Steelers keep yanking the ball away. Tomlin calling Rudolph “2A” is laughable and even Rudolph, usually toeing the company line, got a good quip out of it.

Maybe Trubisky has an unbelievable performance tomorrow. Goes out, torches the Panthers’ defense, throws for 300 yards and three touchdowns. Or maybe he stinks and is yanked at halftime, never playing for the Steelers again. I don’t know. All I know is the Steelers had a messy unclear approach was the wrong path to take that was unfair to both men battling.