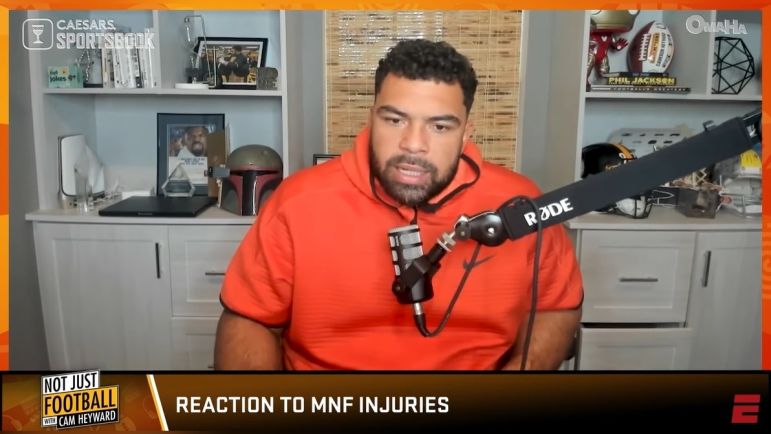 In a year where concussions have been the hot topic and taken with the seriousness they should, the NFL dropped the ball this weekend. Despite the league updating its concussion rules and protocol to remove players who show gross instability, spotters and other medical staff missed New England Patriots’ WR Devante Parker struggle to stand up in Monday night’s win over the Arizona Cardinals.

Cam Heyward had some thoughts on the moment and shared them during the latest episode of his Not Just Football podcast.

“There is a concussion that took place in the game,” Heyward said. “Devante Parker got knocked out. Got up, looked woozy, looked out of it. But I think the best thing you can say is that a teammate noticed it and shut down the play. But on the worst side of things, nobody else shut down the play. Not an official, not a coach, not a medical staff shut it down. Concussions are supposed to be evaluated as soon as someone shows any symptoms. And there was nothing right about Devonte Parker for anyone to think otherwise.”

Some context for those who missed it. Parker took this shot during Monday’s game and clearly had trouble getting to his feet. After stumbling, Parker got in the huddle and then lined up for the next snap. It wasn’t until Agholor, aligned next to Parker, visibly alerted refs to blow the play dead that anyone stepped in to allow Parker to be examined.

A failure by the concussion spotter. DeVante Parker could not stand up straight after hitting the ground. Nelson Agholor took a knee and was flailing desperately to try to get the play stopped for Parker. pic.twitter.com/TtjfOqyEbH

A clear miss by the NFL and its entire medical staff. Following the Miami Dolphins’ mishandling of QB Tua Tagovailoa, the league put in additional safety nets to remove and rule out players who show signs of being visibly concussed. Somehow, all signs were missed here by the Patriots’ medical staff, the officials, and independent spotters whose sole job is to watch for these signs. Parker himself is wondering how the league missed it all, responding to this tweet that the NFL and NFLPA are investigating the incident.

Heyward says he’s been pulled off the field for far less this year.

“I remember first game of the season, I didn’t have a concussion. I got hit in the ribs and I was literally just trying to breathe for a second, and the ref pulled me off and said, ‘you need to go get evaluated before you come back in the game.’ Where was that ref? Where was another ref like that in this game? There wasn’t.”

It’s proof how much work the league has to do regarding concussions. Heyward argued there should be more spotters and additional eyes so these moments can’t be missed. The NFL has made strides in concussion protocol and player safety but Monday night was a clear step backward.