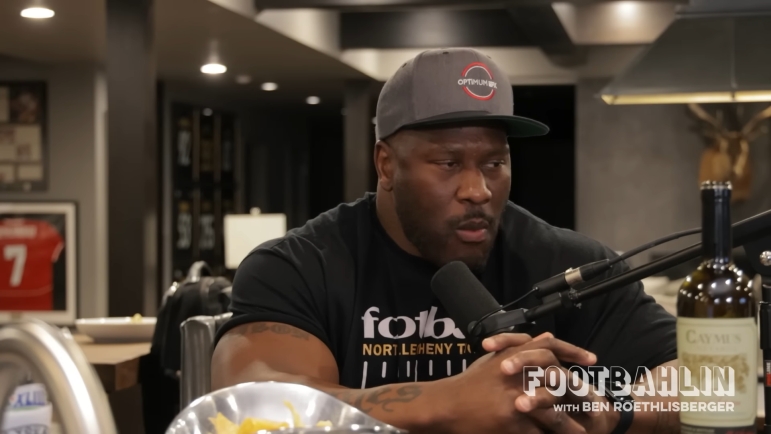 Former Pittsburgh Steelers outside linebacker James Harrison was at one time regarded not only as the most feared player in the game, but also the dirtiest. One title he would gladly embrace; the other, not so much. In spite of a respectable list of fines, and becoming the poster child for the player safety initiative era, he doesn’t shy away from his legacy at all nor apologize for it.

The former Defensive Player of the Year popped onto Ben Roethlisberger’s Footbahlin podcast, a watch-through of Sunday’s win over the Falcons, which was posted yesterday. Roethlisberger asked him at one point what his hardest hit, “legal or illegal”, was in his career. “All my hits are legal, baby,” he deadpanned. As for the answer to the question? “I don’t know, you’d have to ask them.”

One hit that he did recall was from the infamous game against the Cleveland Browns that sort of put the rule enforcement of defenseless players in the spotlight, a game in which he knocked out both Josh Cribbs and Mohamed Massaquoi.

“When I hit my homeboy Josh Cribbs, I felt like when I hit him,” he recalled. As a legal runner, his hit on Cribbs was not a penalty, even if it concussed him. “I want to be able to say I got you. We could talk about that, chop that up. That was just part of the game.”

The hit on Massaquoi as a defenseless receiver, however, absolutely was, and it’s really the first time for many people that they really became conscious of that rule. Though it had long been on the books, the league made an in-season adjustment in making it a point of emphasis following a rash of games in which several players were concussed on illegal hits and ramped up fines, with Harrison being the first one, which he’s still bitter about.

“I hit Massaquoi with about 50%, bro. Dead serious. I just wanted him to let go of the ball. If I woulda knew then what I found out after, I’d a gave him everything I had,” he said. “If I knew they were gonna fine me $75,000 for that, I would’ve laid off into him. He might not have got off the field.”

Truth be told, this is not the first time he’s expressed this sentiment, and, well, you can feel about it however you want to feel about it. He said the same thing in different words a couple of years back on another podcast. He reiterated then that he hit Massaquoi at 50%, and said if he knew the hit was going to get fined, “I would have tried to kill him.”

But everything Harrison says has to be viewed through a particular prism that is summed up in his playing philosophy that he stated well over a decade ago, and which he reiterated in talking to his old teammate this week. “I tried to hurt people,” he said. “I never tried to injure anyone. I wanted them not to be able to finish the game.”

Did he ever try to concuss anybody intentionally? I don’t think so. Did he want to dispirit people, knock them around, make them not want to line up against him, and fill their bodies with bruises? Absolutely. And he did that. Sure, he crossed the line, at least the league’s line, more than a time or two, but not with the ill intent of a Vontaze Burfict.

And the most amazing thing about that play looking back at it in 2022? The only penalty issued was to center Alex Mack for a delay of game for kicking the ball out of bounds after the hit because he thought it might be a fumble.