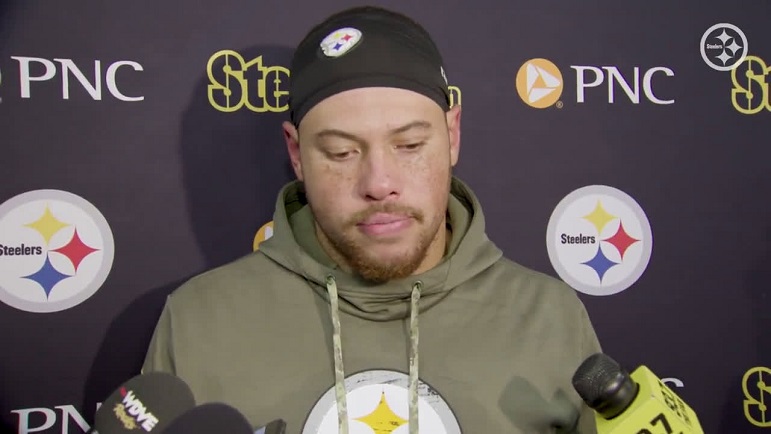 On Wednesday, OLB Alex Highsmith spoke to the media in the locker room and addressed the team’s loss at home against the Ravens and gave some of his thoughts on Pittsburgh’s upcoming matchup against the Carolina Panthers on the road this coming Sunday.

When asked about what went wrong to the Steelers on defense against the Ravens this past weekend, Highsmith stated that they didn’t play assignment-sound football against the run and must make the proper adjustments with the Panthers also being a run-heavy attack they will attempt to do the same thing.

“We weren’t able to stay in our gaps and make the pile fall back,” Highsmith said regarding last Sunday’s game against the Ravens to the media Wednesday on video from Chris Adamski’s Twitter page. “You know, tackling guys, and so, we didn’t do that enough last game and so that’s going to be a point of emphasis with this game because they got a really good running game. A really good division of backs, and so, that’s just really going to be a key to this game.”

The Steelers’ run defense couldn’t stop a nosebleed on Sunday as the Ravens proceeded to gash them for 215 yards on the ground, running straight at them with Pittsburgh providing no response to their rushing attack. Despite having QB Tyler Huntley get knocked out of the game due to a concussion and Baltimore turning to rookie UDFA QB Anthony Brown, the Steelers couldn’t stop what they knew was coming as Baltimore controlled the LOS. RB J.K. Dobbins proceeded to have a career day after just coming off IR the day prior after dealing with a knee injury, rushing for 120 yards and a TD including a 44-yard long run.

The run defense had been better as of late compared to the beginning of the year when the until was bleeding yards and points on the ground. Still, the defense took a step backward on Sunday and will have to quickly regroup in preparation for a Panthers running game that has been red hot the last several weeks, having 185+ rushing yards in three of their last four games.

They just ran for 223 yards against the Seattle Seahawks this past Sunday and have a diverse group of running backs including Chuba Hubbard, D’Onta Foreman, and Raheem Blackshear who all are capable runners. What once appeared to be a cakewalk for Pittsburgh now looks to be a daunting task with Carolina planning to run right at them come Sunday.