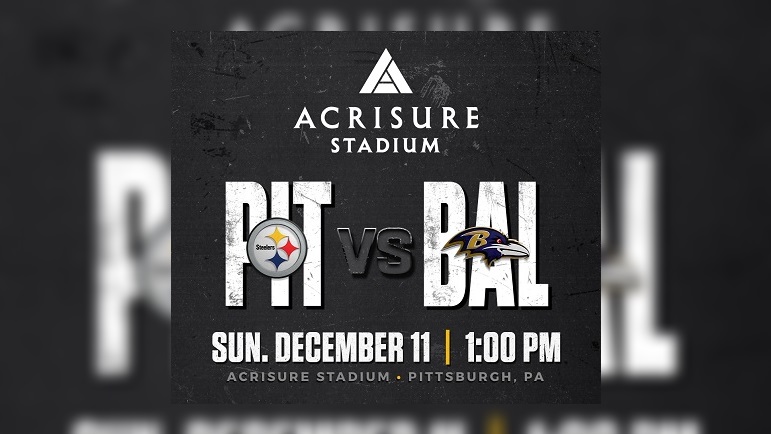 The Pittsburgh Steelers are down their starting quarterback as Kenny Pickett was ruled out with a concussion. Mitch Trubisky led a touchdown drive early, but proceeded to throw two interceptions deep in Ravens’ territory.

The score is 13-7 in favor of Baltimore, but the Steelers will get to start the second half with the ball.

In an emergency situation, Zach Gentry is in line to play quarterback. Though the team would probably opt for wildcat with Najee Harris long before they look to Gentry.

START OF 2ND HALF.

On 1st and 10, Jaylen Warren rushed for a gain of 4 up the middle. On 2nd, Diontae Johnson ran backwards after the catch and gained just one. 3rd and 5, the pass to Sims was good for just two yards. The Steelers will punt, but the Ravens should be pinned deep. The punt ended up a touchback.

The defense is going to be asked to spark some life into this team.

Dobbins rushed on first down for a gain of 9. On 2nd, another Dobbins rush for 6 yards. Huntley complete to Mark Andrews for 10 yards and the Ravens are rolling.

Gus Edwards picked up about 5 yards on 1st down. 2nd and 5, Edwards tackled by Terrell Edmunds and Myles Jack. 3rd and 3, the crowd is trying to get loud. Minkah Fitzpatrick stuffed Tyler Huntley with a violent hit. 4th and 1, will the Ravens go for it again?

Tyler Huntley’s ankle twisted on that hit pretty badly. The punt traveled 35 yards and Trubisky will take over on the Pittsburgh 11.

Big hit by Minkah on Huntley that flag was picked up on #Steelers #NFL pic.twitter.com/ISr2hEJhX2

Mitch Trubisky escaped the sack and connected with Najee Harris for a gain of 10. Steven Sims made a nice move after a short catch to pick up 11.

The Steelers now rolling a bit, but Jaylen Warren lost a yard on the rush.

Another interception from Trubisky this time deep intended for Johnson in the end zone. Marcus Williams touchback.

Tyler Huntley went into the locker room with concussion concerns from that big 3rd down hit.

In a turn of events, the interception actually pins Baltimore at the one yard line. Anthony Brown will take over as the quarterback for this team on the 1 yard line.

On 1st and 10, Cam Sutton tackled the catch for a gain of just 4. Lots of pressure on him in the endzone. Steelers with some poor tackling and JK Dobbins relieved some pressure with a first down rush.

The fumble was forced, but joint possession ruled by the refs which favors the offense. On 2nd and 9, Brown threw the ball long to more or less throw the ball away. Chris Wormley down injured holding his leg.

3rd and 9 after the injury stoppage. Anthony Brown faces his first 3rd and long after navigating that dubious start to his first career snaps.

TJ Watt sacked Anthony Brown. You know he has been itching for that for a few weeks now. Great to see Watt back in the mix making plays.

The punt went 46 yards and a flag backs the Steelers up to the 32. A nice field flipping punt for the Ravens. Must be nice.

George Pickens with another nice catch this time over the middle low to the ground. A gain of 11 yards.

The score remains as it was at halftime, but this game should be very interesting down the stretch. Pittsburgh has moved the ball well, but Trubisky keeps getting picked off. Meanwhile the Ravens are in trouble with Anthony Brown at quarterback.

A gain of just two on the jet sweep. Gunner Olszewski easily tossed to the side on the block. Gunner targeted on the next play, but incomplete. He probably should have secured that catch. 3rd and 8, Trubisky to Jaylen Warren. Warren broke the first tackle and converted a huge play for the offense.

1st and 10, Warren got the toss and rushed for 8. A late flag on Peters for unsportsmanlike. Okorafor probably deserved the flag, but Peters’ reaction drew the flag. Now in the red zone, Trubisky must protect the ball.

On 1st and 10, a checkdown to Warren for a gain of two yards. Trubisky was sacked for a loss of 5 yards. Timeout #1 called by the Steelers to avoid the delay of game. The 3rd down pass was deep to Diontae Johnson, but incomplete with Marlon Humphrey in coverage.

Chris Boswell will get his first field goal attempt since returning from his injury. The field goal was blocked. Brutal. That is now 3 drives in or very near the red zone that produced zero points.

Anthony Brown will take over from his own 22 yard line. The Steelers have no business winning this game, but its still very much within reach. The defense cannot allow anything silly.

'I could not stand that song. I wouldn’t look at the board. I would do anything but look. On this side it’s exciting because it gets you so pumped up. I love ‘Renegade’ now.' – @MBoykin814 hated 'Renegade' when he played for the Ravens, but loves it now

Can the Baltimore rushing offense close this game out?

On the first two plays, Dobbins rushed for 9 yards. 3rd and 1, Patrick Ricard up the middle for 2 yards.

On 1st and 10, an incomplete pass to Duvernay over the middle. Nearly picked off on the deflection by Kazee. A gain of 6 yards on 2nd down with a completion to Robinson. 3rd and 4, Brown complete to Mark Andrews for 7 yards. Steelers defense is getting worked by a quarterback in his first NFL action.

On 1st and 10, JK Dobbins rushed off right tackle for 14 yards. Now comfortably in Justin Tucker field goal range to make it a two possession game, the Steelers chances are quickly waning.

You can't turn the football over three times, plus another blocked FG, and expect to win when you're defense can't take it away. #Steelers

The Steelers’ playoff chances more or less come down to this 3:19 with two timeouts down 9 points. ESPN’s mathematical model has them with a 1.6% chance of winning.

A huge completion to Diontae Johnson with some penalty yardage tacked on after for roughing the passer. The Steelers find themselves with 1st and goal.

On 1st and goal, incomplete to Najee Harris. 2nd and goal, another incompletion to Diontae Johnson in the end zone, but offsetting penalties wipe the play out. On 2nd down, a touchdown pass to Pat Freiermuth. 16-14 Ravens.

The kickoff was returned to the 21 yard line for the Ravens. On 1st down, Gus Edwards rushed for 6 yards. That is not the type of first down the Steelers were hoping for. Timeout #2 called by the Steelers. 2:18 remaining in the game with 2nd and 4. On 2nd and 4, Edwards rushed for just 1 yard. Timeout #3 called. 2:14 remaining. On 3rd and 3, the Ravens convert with a 6 yard rush off right tackle.

Ballgame. Ricard and Ben Powers iced it with monster blocks.