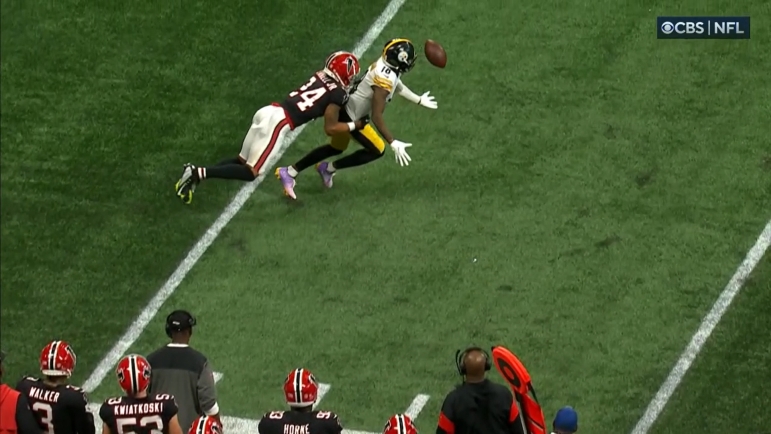 Reasoning: The veteran wide receiver didn’t help his case on Sunday with an up-and-down game, committing two significant unforced errors that reinforce stereotypes about his game. Since signing a new contract extension, his numbers have been thoroughly pedestrian, and he’s not entirely blameless in that.

For some, Diontae Johnson’s history of drops is one that he will never be allowed to live down. He was among the worst in the entire NFL in that category back in 2020, but he cleaned up the issue significantly last year. This season has been somewhere in between, and unfortunately, his last outing didn’t help his case.

While it’s not solely about dropped passes, it’s the easiest way to talk about Johnson’s season right now, one in which he is putting up painfully mediocre numbers. A lot of that has to do with the way he’s been used and the opportunities he’s been given, as well as a still-shaky chemistry with quarterback Kenny Pickett, but he needs to do better, or at least be more consistent, in his own right.

The Steelers had an opportunity for a big third-down conversion in the second quarter on a 3rd and 11. They schemed the right sideline clear for him—all he had to do was catch and turn and run. Unfortunately, he tried to do all three at the same time and ended up doing none of them.

The second blemish isn’t really a drop, at least not in the traditional sense, because he actually fielded the ball cleanly. You already know the play. It was originally ruled a fumble on the field, but the officials determined that he did not complete a ‘football move’ after the initial touch, so by the ‘letter of the law’, it’s not an NFL catch, even though by any reasonable standard it was (and a fumble).

So he actually got a break that time with the second incomplete pass being ruled incomplete rather than a fumble. It’s just as bad as a drop whether scored as a drop or not, as it’s ultimately a play where he clearly had the opportunity to complete the catch process and did not.