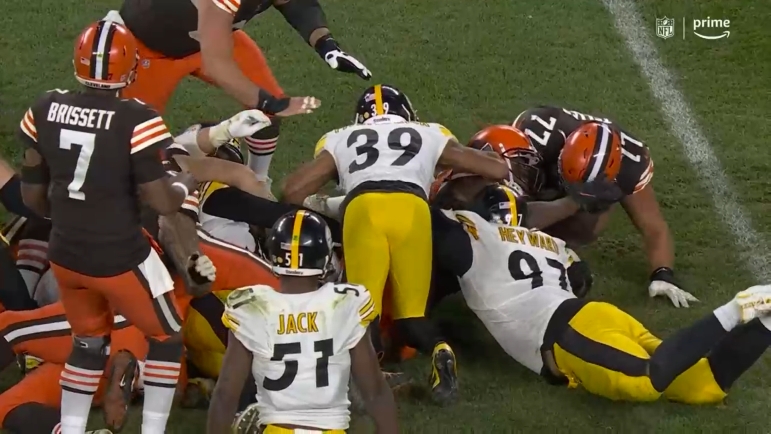 While Minkah Fitzpatrick will likely be a game time decision for Sunday’s matchup against the Cincinnati Bengals, he still plans to be a big help the rest of his teammates out in prepping for Joe Burrow and the defending AFC North champions.

Speaking with reporters today via Steelers.com, Fitzpatrick was asked about how he could still help out his teammates even if he is unable to suit up on Sunday due to still healing from a removed appendix.

“I think I can help them out a lot” Fitzpatrick responded. “You know, I’ve been playing them for the past four seasons twice a year. So we’re familiar with them. There hasn’t been a whole lot of turnover in the receivers and quarterback and offense. There’s a lot that I can offer.”

Since Fitzpatrick joined the Pittsburgh Steelers in the middle of the 2019 season, Zac Taylor has been their head coach, and Brian Callahan has been their offensive coordinator. The two people in charge of scheming up Cincinnati’s offense have been in the AFC North just as long as Fitzpatrick has, creating a lot of familiarity.

At quarterback, Burrow has been in charge of the offense since 2020 and like Fitzpatrick said, their wide receivers have been a constant. Tee Higgins has been on the roster as long as Burrow has been, and Tyler Boyd has been a Bengal since 2016. The Steelers luckily won’t have to face off against Burrow’s favorite target in Ja’Marr Chase on Sunday, but Burrow’s other main guys have been there a while and have a great connection with their quarterback.

Fitzpatrick is known for being a “film room guy” who spends hours looking for tells and signs to help him make his big plays. He made one in Week One when he intercepted a Burrow pass and took it back for a touchdown.

Even if he cannot suit up, Pittsburgh has another ball-hawk in the secondary who can try and replicate Fitzpatrick’s impact. Damontae Kazee will be replacing Fitzpatrick at free safety if the All-Pro cannot play on Sunday and he has the ability to make big plays. In his six year career Kazee already has 13 interceptions, proving that he can grab an errant pass out of the air with the best of them.

If Fitzpatrick can coach him up on some of Burrow’s tells and tendencies, the Steelers will have a great chance to win the turnover battle. And if they can do that, they will likely win the game.