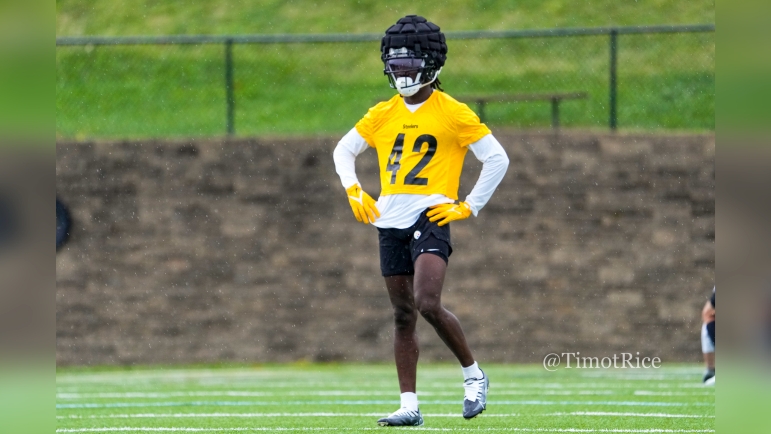 The rest of the Pittsburgh Steelers’ 2022 is about 2023. A look to the future, the players who can turn the Steelers around a year from now. On paper, the trade for CB William Jackson III didn’t seem to come at much of a cost. A 2025 conditional, late round pick swap. That’s about as little as a team can give up for a player. But there is a cost. The chance to evaluate a corner like James Pierre.

I have no delusions over who Pierre might be. He’s not the next shutdown corner, the next Ike Taylor. But he’s an interesting player. 26 years old but only in his third NFL season, he’s always had the talent. The size at 6’0 and he runs better than his 4.59 40 time. His physicality is solid, a good tackler and force player in the run game. He has the tools. He just needs the reps. Like most young corners, Pierre took his lumps in his first serious action last season, getting Moss’d in the Bengals’ game and benched midway through the season.

With Ahkello Witherspoon, Levi Wallace, and Cam Sutton ahead of him on the outside this offseason, Pierre was just playing for a roster spot. He made it, making plays in camp and easily beating out former third round pick Justin Layne. Pierre started the year as a gunner and special teamer, playing well opposite Miles Boykin. Like Mike Tomlin says, Pierre worked while he waited, and the door opened in Week 5. He played in the second half of the blowout loss to the Buffalo Bills, replacing the injured Wallace, before getting the start in Week 6 when Pittsburgh’s secondary was depleted by injury. Pierre and others rose to the occasion and Pierre was the best corner that day. Tampa Bay’s offense may be worse than we knew at the time but he still made plays on the ball. On third down, in the red zone, the “weighty” moments corners get judged by.

After Witherspoon was torched against the Eagles, Pierre came in to replace him and held his own. Despite being challenged, he wasn’t beat deep, pressing and slowing A.J. Brown down well on this second-half attempt. Cover 1, man-free, 1v1 at the top and Pierre forced the incompletion. Didn’t see that from Steelers’ corners in that game.

But it’s not just about one game. Though sample size is still relatively small, Pierre has posted fantastic numbers when targeted this season. He’s allowed just six completions on 14 targets for 51 yards, a QB rating against of 53.0. Compare that to the other corners on the team.

Pierre’s mark easily the best of any Steelers’ corners. For a team needing more help there, Pierre was answering the call. He was playing smarter and with more consistency, things that got him in trouble a year ago. Natural progression you’d expect and he’s showing it.

What’s the issue with Pierre? We just don’t know enough about him. Admittedly, he hasn’t played a lot of football. Just over 400 last year and 150 this season. There’s not enough snaps to fully evaluate, a sample size that’s too tiny, just as it’s proven to be with Witherspoon, his six-week sample size last year being a mirage for what’s come to pass in 2022.

Guess what’s the worst thing the Steelers can do with Pierre? Not play him. To bring it back to the trade, that’s why acquiring Jackson from Washington comes out a cost. The cost is limiting Pierre’s snaps and opportunities to play. Witherspoon being benched is fine by me, he’s simply never been consistent, but that could’ve opened the door for Pierre. Wallace is still going to play, he hasn’t been great but serviceable, and so long as his shoulder injury isn’t incredibly serious, Pierre is going to be squeezed out. Jackson will start in base with Wallace rotating in nickel, assuming Sutton bumps inside in those situations.

Granted, another injury could reopen the door for Pierre but who knows when that’ll happen. Maybe in Week 10, maybe not until Week 16, which again brings the sample size issue into light. It should be pointed out he suffered a foot injury late in the Eagles game but there’s no current indication it’s serious – he spoke with reporters during the week – and he has the bye week to recover.

At the least, Pierre should be playing in sub-packages for the rest of the season. That’d be a nine-game sample size on top of the snaps he’s already logged to really get a feel for him. There’s no guarantee you’d like what you see but not knowing the answer is far worse than knowing it, good or bad. If he plays well, he’s in the team’s plans in 2023, an important thing with Sutton set to hit free agency, Jackson likely being a rental, and Witherspoon’s future totally up in the air, under contract but a boom/bust player. I’d hate to go into the offseason not knowing what path to take with Pierre.

That’s the cost of adding Jackson. The back half of the season should be about playing the young guys. The ones who could help rebuild this team next year. Not veteran players who probably won’t be part of the plan. It’s only a draft pick three years from now but this trade cost a lot more than that.