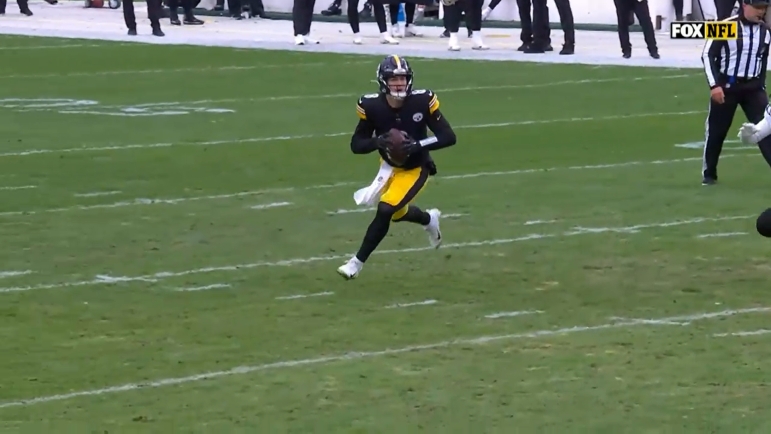 Pittsburgh Steelers rookie quarterback Kenny Pickett had an excellent game when running with the football last Sunday afternoon in the Steelers 20-10 victory over the New Orleans Saints. Despite not having a great game throwing the football, when including the use of his legs, last Sunday was Pickett’s best performance of the year.

In his weekly press conference, Steelers head coach Mike Tomlin was asked if due to Pickett’s performance he would be willing to call more designed runs for his quarterback.

“I think every time I say, you know, quarterback mobility, I always say the prudent use of quarterback mobility,” he said via the team’s YouTube channel. “And I do so intentionally because there’s risk associated with that” answered Tomlin. “Mobility is a good thing, but when and how to use it while managing the risk component of it is also an element of the equation and will always be, particularly at that position.”

Pickett has not been given many designed runs in his young career that are no quarterback sneaks. In last Sunday’s win, Pickett only had one designed run that was not a sneak; that was a five yard run out of the shotgun. However, he did carry the ball eight times and picked up 23 yards on one of those carries. That play was a scramble on the first offensive play of the second half for Pittsburgh and set them up to have a really nice ten play, 64-yard drive that ended with a missed field goal by Matthew Wright.

The most effective Pickett has been in the red-zone has been on the ground as well. The Steelers offense has stalled out on many occasions in the red-zone, but all of his touchdowns that have come on the ground have been from inside the 20, more specifically, the five. Pickett has been super efficient on the quarterback sneak, something that the Steelers rarely did in the back half of Ben Roethlisberger’s career. Pickett is six for six on quarterback sneaks in his career so far making it a play that is almost a sure thing to work when called.

Other than those quarterback sneaks, Tomlin and offensive coordinator Matt Canada have been hesitant to call designed runs for Pickett. Tomlin mentioned the risk involved with purposefully running with the quarterback and he does not want to put the quarterback who will hopefully be the future of the franchise at risk of serious injury. Pickett already has suffered a concussion this year and by designing runs for him, there is a greater chance of him getting his bell rung and suffering another concussion.

Despite his success running the football, playing it safe with Pickett and not calling too many designed rushing plays is the right thing to do. Pickett needs to work on improving his passing, and the chances of him suffering an injury through running the football could derail the much needed reps to help Pickett take the next step as a quarterback.