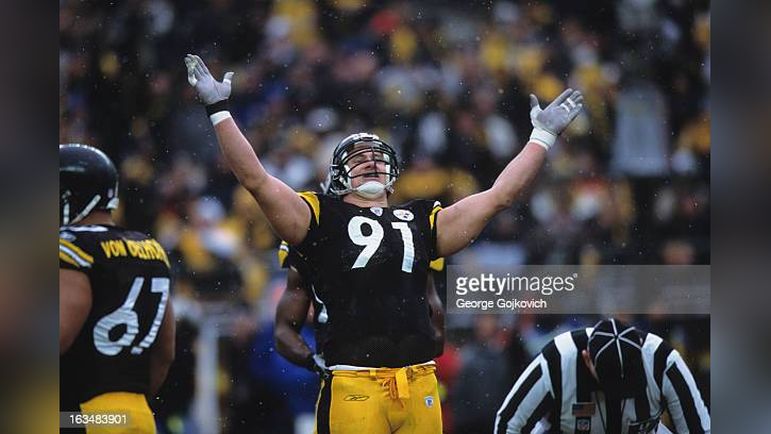 Atlanta Falcons head coach Arthur Smith believes the Steelers defensive front is very similar to the front the 2008 Steelers had. Smith first broke into the NFL as a quality defensive quality control coach with the Washington Commanders (then the Redskins) in 2007 and first faced off against the Pittsburgh Steelers the following season.

While he was prepping for the Steelers offense when the Steelers went to Washington D.C. on a Monday night in 2008, he clearly was moved by that dominant Steelers defensive front as in his press conference today, streamed via AtlantaFalcons.com, he told reporters he sees a lot of similarities, between the Steelers defense of then to now.

“You blink and it’s 15 years ago” Smith said. “Whether it was [Brett] Keisel and Casey Hampton and Aaron Smith and LaMarr Woodley; and you got this group of guys now and there’s a standard in Pittsburgh.”

That game in 2008 that Smith coached in the Steelers defense held Clinton Portis to 51 yards and held the Washington offense to 60 total rushing yards. And while that run defense was the second best in the NFL that season allowing only 80.25 yards per game, only behind the Vikings, the current Steelers rush defense is pretty good too, sixth best in the NFL allowing 104 yards per game.

Digging in deeper, it is no question that the 2008 team was better, but the two squads are built very similarly. The 2008 Steelers had two elite outside linebackers/EDGE rushers in James Harrison and LaMarr Woodley and the 2022 Steelers have T.J. Watt and Alex Highsmith who are both amazing. Watt is the defending Defensive Player of the Year and Harrison won DPOY that season. 2008 was Woodley’s breakout season, recording 11.5 sacks that season and this year is Highsmith’s breakout year with him having ten sacks so far on the season.

Moving to the trenches, the Steelers are a little different now than back then as they normally have two down defensive lineman instead of three. However, Cam Heyward is kind of like Aaron Smith in the fact that he is just good at everything. Smith was great at stopping the run and could also get to the quarterback. In 2008 he was third on the team with 5.5 sacks. Heyward currently has four sacks on the season which is second best on the team this year. Larry Ogunjobi is similar to Keisel in the fact that they do their job and don’t get bullied. Keisel wasn’t a flashy player who was always on the stat sheet, but he was never bullied on the line of scrimmage and could pull out a timely play.

No one is mistaking this Steelers team for their 2008 version, but it is interesting that Smith views the Steelers defensive front so highly. Under Smith, the Falcons have a committed rushing attack, running the football on 58.6% of their plays which is second highest this season. The game on Sunday will be won in the trenches, just like in the game Smith’s Commanders lost to the Steelers on that Monday night in 2008.

The question looking forward to this Sunday is, can the 2022 Steelers live up the high praise Smith gave them and dominate like it’s 2008 all over again?