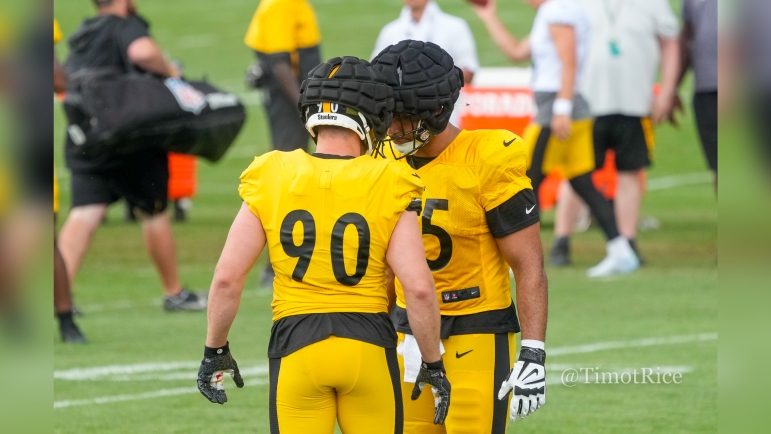 While there are many differences between last year’s playoff-bound Pittsburgh Steelers and the current 2-6 team, perhaps no difference is greater than losing the reigning Defensive Player of the Year, LB T.J. Watt. Watt was injured during Week 1 of the season, and has not played for the team since then, missing seven consecutive games due to a torn pectoral muscle. It’s safe to say that the defense has not been nearly the same juggernaut that played against the Cincinnati Bengals to start off the season, and honestly has looked as incompetent as the offense in certain games thus far.

However, as it stands now, Watt looks healthy enough to be in the defensive plans this Sunday when the Steelers host the New Orleans Saints, which will undoubtedly provide a huge boost to the defense, regardless of the number of snaps he plays in his return. Earlier today, Defensive Coordinator Teryl Austin was asked about the ripple effect he believes Watt will have on the rest of the defense come Sunday afternoon.

“I think anytime you have a great player, and the other team has to provide resources to protect from that player, it opens up some things for somebody else,” said Austin according to a team transcript. “It’s the same way when we’re planning for a great player, you try to make sure that he’s not wrecking the game for you.”

Perhaps the most notable statistic that illustrates just how impactful Watt is to the defense as whole is the stat numbers. LB Alex Highsmith registered three sacks in the season debut, but without the added pressure of Watt on the other edge, he’s only added three and half more sacks through the past seven games. Similar to DT Cam Heyward, who has only registered three sacks throughout the entire season as he is experiencing consistent double teams which is not the case when Watt is active.

“Cam is not going to get the protection slid to him as much,” explained Austin. “Alex won’t get it slid to him as much. So now, all a sudden, they’re going to be maybe in some more one-on-one situations that maybe they haven’t been in the last few weeks.”

This Sunday is one of the more winnable games on Pittsburgh’s schedule so far, so a win would be crucial. In a game where both teams are already in “must-win” territory at the halfway point of the season, Watt and the entire defense will need to make their presence felt if they’re going to get back on track.