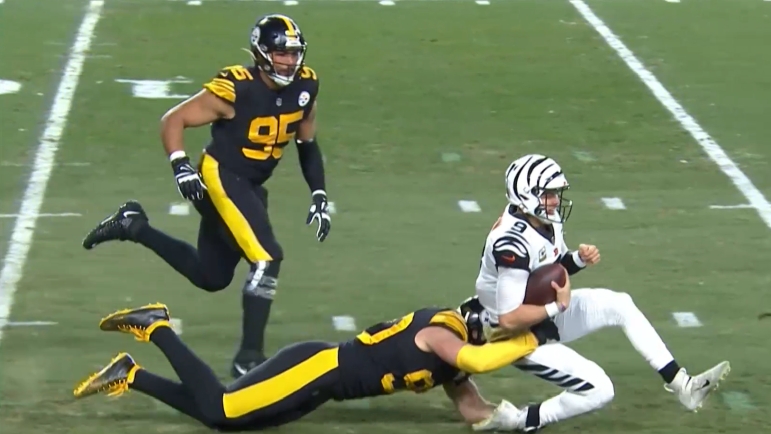 OLB T.J. Watt took the podium in the post-game press conference and was asked about the plays that the Bengals executed well to get mismatches in coverage or guys wide open in space to which Watt responded that the defense clearly wasn’t on top of their game tonight.

“I mean, it was a lack of execution,” Watt said to the media on video from the team’s Twitter page. “they had a good game plan for us, clearly. They were able to move the ball down the field. We weren’t able to hold them to field goals and help our offense out. We just need to finish plays. I mean, myself personally, I only get so many one-on-ones in a game. When I get them, I need to execute, and I need to finish on the quarterback, and I wasn’t able to do that tonight.”

T.J. Watt addresses the media following our game against the Bengals. pic.twitter.com/KLvDIhI2Yw

Watt is referring to a play where he blew past RT La’el Collins around the corner and had QB Joe Burrow dead-to-rights but missed the sack opportunity as he dove at the passer’s legs, allowing burrow to escape the pocket and throw the ball away while Watt and Alex Highsmith dragged him down from behind. It’s tough self-criticism from Watt who made an impact against the run and even picked off a pass from Burrow much like he did in Week 1, jumping up to bat down a pass at the LOS, but snagged it in the air for the pick.

Still, Watt didn’t make enough plays in the pass rush department to get pressure on Burrow who picked apart the Steelers’ defense throwing four TDs including three to backup RB #34 Samaje Perine who often was unaccounted for in the passing game due to clear lack of communication on the defensive side of the football.

While the offense didn’t do the defense any favors in the second half, plenty of the issues the defense faced in the crucial moments of the game were self-imposed. The allowed the Bengals to drive 93 yards down the field to effectively put the game out-of-reach and put up little resistance against Burrow and the Bengals offense despite being nearly full strength with several starters returning from injury.

Excuses aren’t going to help solve the problem that the Steelers are continually facing as they try to close out games. Watt is the first to admit that, and he is taking ownership by holding his own play under the microscope knowing he must play at an impact level every time he touches the field to help the team win games. Hopefully, the rest of the team follows suit and more self-accountability results in Pittsburgh improving execution in the waiting moments of close games.