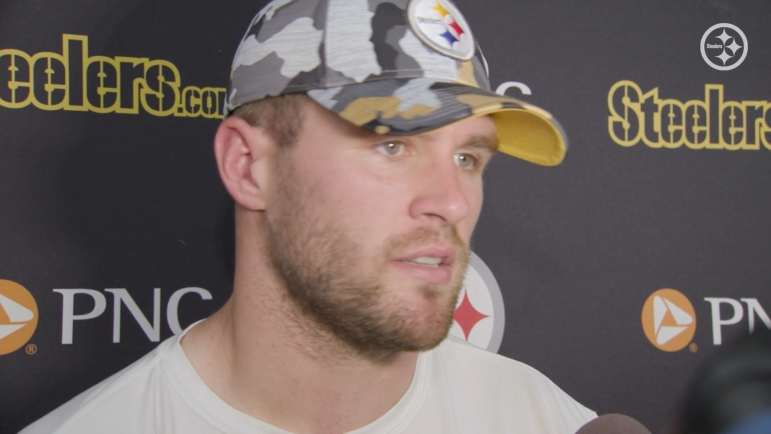 After injuring his pec in Week 1 at Cincinnati and missing nearly eight weeks including the team’s bye week, OLB T.J. Watt has confirmed the team that he’ll be activated in-time to suit up this Sunday at home against the New Orleans Saints.

Speaking with the media Friday after practice, Watt gave his feelings about his return to the field in his first game back after getting injured in the season opener and was asked if he anticipated being put on a pitch count to limit his snaps on Sunday.

No pitch count,” Watt said to the media Friday on video from Steelers.com. “I don’t want to put any limitations on myself. I never play 100% of the snaps anyways.”

Watt’s comment slightly contradicts what DC Teryl Austin said in regard to Watt’s snaps in his first game back, stating on Tuesday that he didn’t think that it would be realistic to think for a guy coming back after seven weeks off.

However, Watt isn’t your normal football player. The reigning Defensive Player of the Year plays full-speed anytime he touches the football field, giving great effort on each and every play with a motor that it always running hot. Watt said as much above, knowing that his work ethic and hustle have made him one of the best players in the NFL and doesn’t see that changing due to the fact that he took some time off.

Watt may not see a full allotment of snaps like he is used to, but he averages in the 80-85% snap range in previous seasons, suggesting he wouldn’t be expected to play all the defensive snaps anyways. Regardless, the return of watt for 20 snaps, 30 snaps, or 40 snaps will provide Pittsburgh with a notable spark in terms of disruption in the pass rush department as well as a capable edge-setting presence against the run in the team’s first game back coming off the bye.