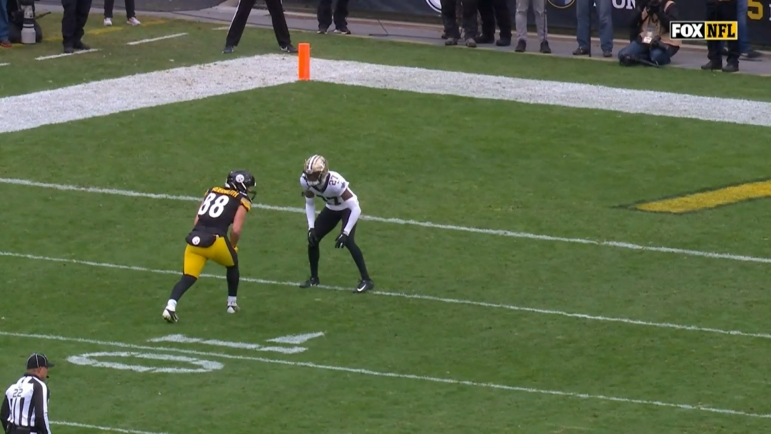 Pittsburgh Steelers second year tight end Pat Freiermuth has only one touchdown this season. Going into his ninth game last season Freiermuth already recorded four touchdown receptions and would finish the season with seven. All of those seven touchdowns came from inside the 20-yard line.

In his weekly press conference today, posted by Steelers.com, rookie quarterback Kenny Pickett was asked about getting Freiermuth more involved inside the red zone.

“Yeah, he’s another guy that can get a lot more involved” responded Pickett. “You know, that’s something we’ll look at and we’ll continue to do.”

This year, Freiermuth has not been targeted too often in the red zone, only seeing six targets though eight contests. Last season, Freiermuth saw 18 targets inside the 20 by the end of the season. But he saw two targets on Sunday, isolated on the backside of these two plays. One fell incomplete while the other drew a penalty that set up a touchdown.

The Steelers in general have not been too successful in the red zone, and have a touchdown success rate of 46%. Comparing that to last year, that number has dropped eight points as they scored a touchdown on 54% of their trips to the red zone.

Part of that lack of success is due to the quarterback situation. Neither Mitch Trubisky nor Pickett are playing to the level Ben Roethlisberger was last season. Even in a bad season for Roethlisberger standards, he was still about average in getting the team six points inside the 20 as the Steelers finished 21st in red zone touchdown percentage in 2021. This year they are 28th.

Pickett continued in his press conference today, talking about how Freiermuth was involved more in the red zone against the New Orleans Saints, yet they could still get him more targets.

“The two targets we had to him, that we had the one PI and then we just missed on that one back shoulder. But something that we had to keep working at and those were two good opportunities, but I think we could definitely get more.”

The pass interference call against on Sunday was a bit lucky in my opinion as it could have gone either way, or even not called at all, but it was still good to see Freiermuth targeted in the end zone. Those two targets makeup ⅓ of his total red zone targets this season, so Pickett is clearly right in that he needs to see the ball more often close to the goal line.

Last year, Freiermuth was one of Roethlisberger’s favorite targets in the red zone last year and for good reason: he normally caught the ball. A play that sticks out was his incredible touchdown grab against the Browns on fourth and goal.

Freiermuth has great hands and targeting him more inside the 20 should help the Steelers bring that red zone touchdown percentage up over 50%.