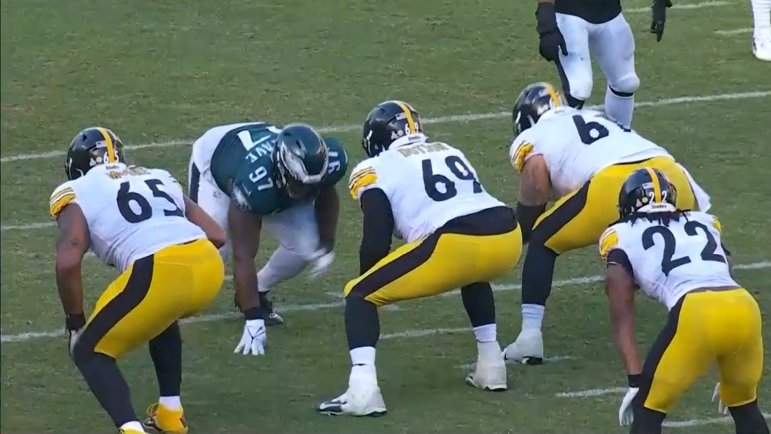 Since the mass exodus of long-term starters on the OL including LT Alejandro Villanueva, LG Ramon Foster, C Maurkice Pouncey, RG David DeCastro, and RT Marcus Gilbert/Matt Feiler, the Steelers have had issues replacing the talented unit that protected QB Ben Roethlisberger and opened running lanes for RB Le’Veon Bell for the better half of a decade. From 2015-2020, Roethlisberger was never sacked more than 24 times in a season. In 2021 after Pittsburgh attempted to revamp their OL, Roethlisberger was sacked 38 times in his final season, the most since 2013 when he was sacked 42 times.

So far in 2022, Pittsburgh has allowed 27 sacks in nine games, having the least passing TDs in the league (6) while also ranking near the middle of the pack in rushing (22nd). While the passing TDs and rushing yardage can be on the QB situation in Pittsburgh as well as the up-and-down play by RB Najee Harris, part of the blame still falls on the offensive line who are working at establishing themselves as an adequate unit in the NFL.

While the OL has taken strides forward this season with their most recent game against the Saints showing improvement in the running game specifically, there is still work that can be done in terms of improving the personnel upfront. This offseason, Pittsburgh re-signed RT Chukwuma Okorafor and brought in FAs C Mason Cole and G James Daniels to provide experience and boost the level of play upfront from what Pittsburgh had out there at center and right guard last season.

Still, the left side of the line has remained untouched from last season with LT Dan Moore Jr. and LG Kevin Dotson manning their respective starting spots. Moore has shown some growth in his second season as a starter after being thrust into action as a rookie last season, but has still left a lot to be desired in terms of becoming a franchise-caliber LT. Dotson hasn’t made a great case for himself either in 2022 as he has started all nine games, but has continued to struggle with inconsistent play both in pass protection as well as in the running game as referenced in Alex Kozora’s most recent film room breakdown.

Watch: Kevin Dotson Is The Most Frustrating Steeler

The general thought process has been that the Steelers will focus on beefing up the trenches in the 2023 NFL Draft, specifically adding starting-caliber talent to the offensive and defensive lines. The left side of the offensive line has seen the most scrutiny as of late due to up-and-down play with the question of what the upside is of both Moore and Dotson as starters in the league. While LT is generally considered the more important position on the offensive line than LG, should Pittsburgh look to prioritize adding a plug-and-play guard this upcoming offseason via the draft or free agency over LT?

While Moore hasn’t been consistent at his spot like Dotson, he is only in his second season compared to Dotson who is now in his third season with a contract year coming up in 2023. He recently posted his best performance of his career according to Pro Football Focus, posting a 91.3 run blocking grade, by far the best of his career.

According to PFF, #Steelers LT Dan Moore Jr. allowed just three pressures on Sunday against the Saints on 45 pass blocking reps, one of which went for a sack.

Moore may never become a Pro Bowl LT in the league, but if he can show signs of continued development and become an average to above average blocker, it would narrow down Pittsburgh’s need to completely revamp the entire left side of the offensive line and focus on finding a solution at LG. Dotson has also shown flashes, but inconsistent play as well as injuries have poured cold water on what was once high expectations for what many were hoping to be a mid-round steal. Positional value must be considered, but where we stand today halfway through the 2022 season, I’d personally hedge that Pittsburgh would prioritize finding an upgrade at LG for Dotson over Moore at LT for 2023 and beyond.

What are your thoughts on Kevin Dotson and Dan Moore Jr.? Do you think both need to be replaced this coming offseason? Which position should Pittsburgh prioritize upgrading and what is your reasoning? Please leave your thoughts in the comments section below and thanks again for reading!