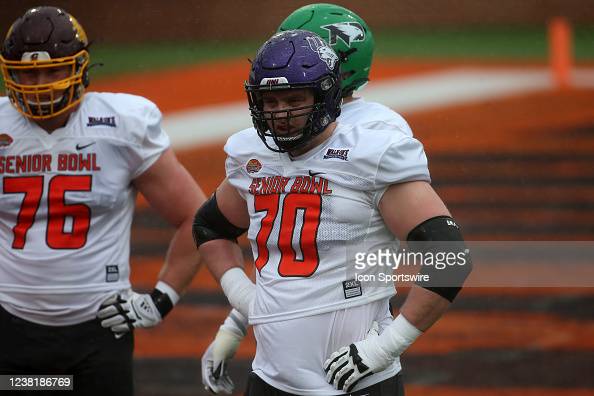 New Orleans Saints first-round draft pick Trevor Penning was designated to return off injured reserve today and his 21-day practice window has opened. With the Pittsburgh Steelers set to play the Saints on Sunday, Penning’s status will be one to monitor. The news was first reported by Nick Underhill of New Orleans Football.

A Northern Iowa product, Penning was selected 19th overall, one pick ahead of the Steelers, who used their 20th overall selection on quarterback Kenny Pickett. Penning made news during training camp for getting kicked out of practice after fighting with teammates, and then he suffered a foot injury that required surgery and landed him on IR.

Penning told reporters, including New Orleans Football he had four weeks on a scooter and four weeks in a boot during the rehab of his injury. He also had a metal plate inserted in his foot.

With Penning out, the Saints have been relying on veteran left tackle James Hurst to play left tackle with Ryan Ramczyk manning the right side. Terron Armstead was the long-time left tackle in New Orleans, but he left this offseason for a lucrative contract with the Miami Dolphins, and the Saints filled the void by drafting Penning.

With Penning’s window just being opened today, it would be a bit of a surprise to see him active on Sunday. If he does play, he’ll have a tough matchup against Steelers’ outside linebacker Alex Highsmith awaiting him. However, he would probably be an upgrade over Hurst and I’m sure the Saints are anxious to have their first-round pick back in action.

You can read Steelers Depot’s profile on Penning written by Jonathan Heitritter below.