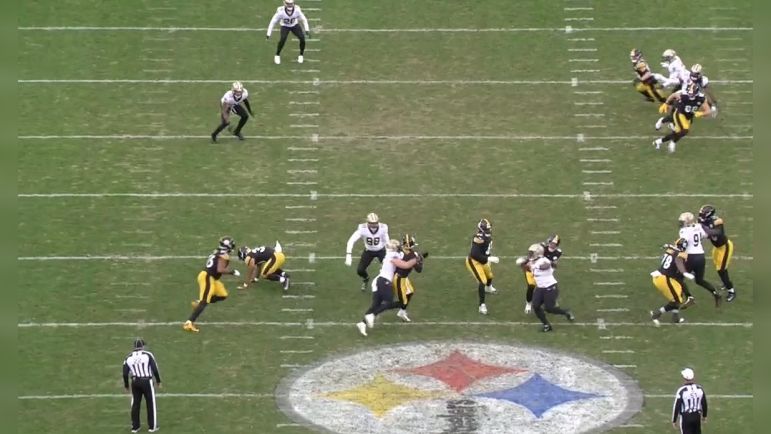 The Pittsburgh Steelers are keeping me a busy man. Breaking down another six sacks the team allowed in last Sunday’s win over the New Orleans Saints, making for the first time since 1989 the team has been sacked six times in consecutive games.

Nice call here from the Saints, bringing #19 late on a nickel pressure. Steelers using playaction and Najee Harris doesn’t see it – understandably so – so he doesn’t abandon his assignment to pick it up. Pat Freiermuth is going out on his route to the flat and with the line sliding down, the nickel rusher is free.

Little hard to see on the end zone view but kinda odd no receiver was “hot” here. Freiermuth never even got his head around in the flat, which he normally would since it’s a short and quick throw, while WR Gunner Olszewski never looked back as he saw the corner blitz, though he was running a deep corner route. 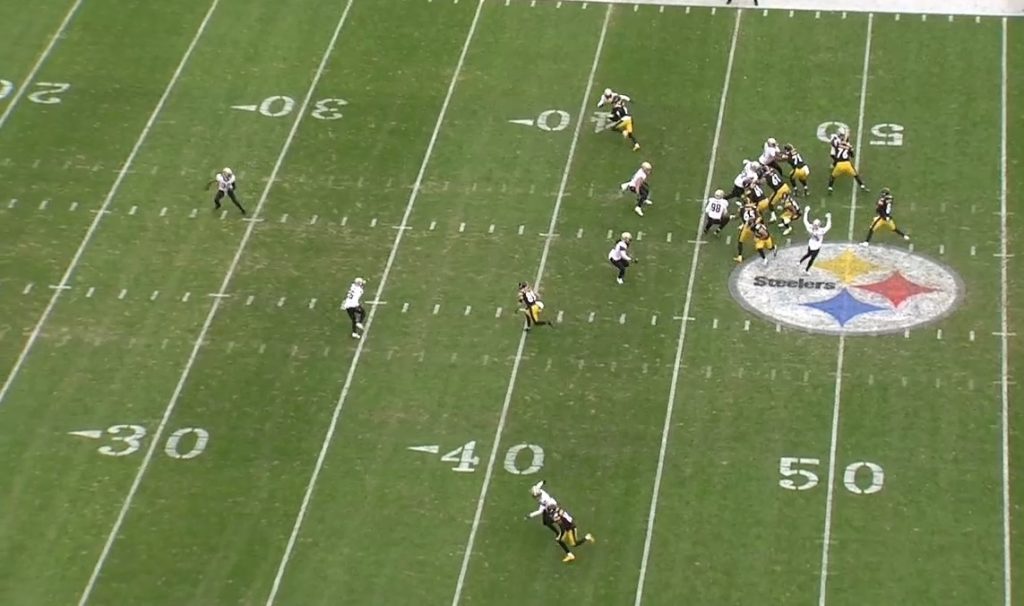 Not much Pickett can do here. Just has to eat the ball. And I don’t see any reason to blame the line here with the way they were asked to slide. Just a nice call though I still wonder why Freiermuth never got his head around. I’m sure there’s something the Steelers could’ve done here but I’m going to credit the Saints on this one.

Disappointing whenever you keep six in against four and your quarterback still gets crushed. Pittsburgh’s struggled with stunts the last few weeks, dating back to the Dolphins’ game, and they get got again here. LB and RDE running a game and it’s just a mess. Moore is bumped off track, the LB/crasher free, while the looping DE gets pitted on poor RB Jaylen Warren.

The basic rule is first uncovered starts the slide and with the NT head-up on C Mason Cole, Kevin Dotson is correct to slide away initially. But with the NT spiking away and nothing coming back towards him, Dotson needs to have active eyes and look for work. He doesn’t even try and is in no man’s land as Pickett gets crushed. Had he gotten his eyes back, he may have been able to at least help here on the DE, even if it hadn’t prevented the sack.

As we wrote in our scouting report, the Saints run a lot of games on third down with a head-up NT and the Steelers don’t seem prepared for it with their slide. They’re in more BOB (big on big, back on back) protection) with the back on the LB, the LT on the RDE. But with the game, that changes. Maybe they were in a “man” protection where any stunt wouldn’t be passed off but when Moore gets picked, that all changes.

While I was critical of Dotson in my recent film room, I don’t think he could’ve done anything to prevent the sack, provided that he was correct with his initial slide (and I believe he was). The LB is still free. I’m actually going to have a rare “blame” on OL Coach Pat Meyer, who didn’t put his team in good position to handle the stunt. A few plays later, again with the NT head-up, you can see them change protection and not have Dotson slide and they man up. Dotson actually does a nice job here allowing Pickett to scramble. That’ll be the second clip below for you guys to compare. But bottom line, this is coaching.

Never want to get sacked on a three-man rush though this is an end-of-half situation. Still, Pickett is trying to run when he doesn’t need to. Mobility is nice but it can really mess with your blockers. Defenders have vision on the QB, not your line. And Pickett runs into trouble, stepping up, trying to bail, and smacking himself into RT Chukwuma Okorafor. Second time this season Pickett has literally run himself into a sack.

Do want to point out I don’t know what the Steelers are trying to accomplish here. Look at the routes. Five seconds left doesn’t allow for a long throw to the sideline because the half will expire. This isn’t a lateral situation or a Hail Mary. It’s a…normal play. So I don’t know what Pittsburgh was trying to accomplish here. Still, this is on Pickett. 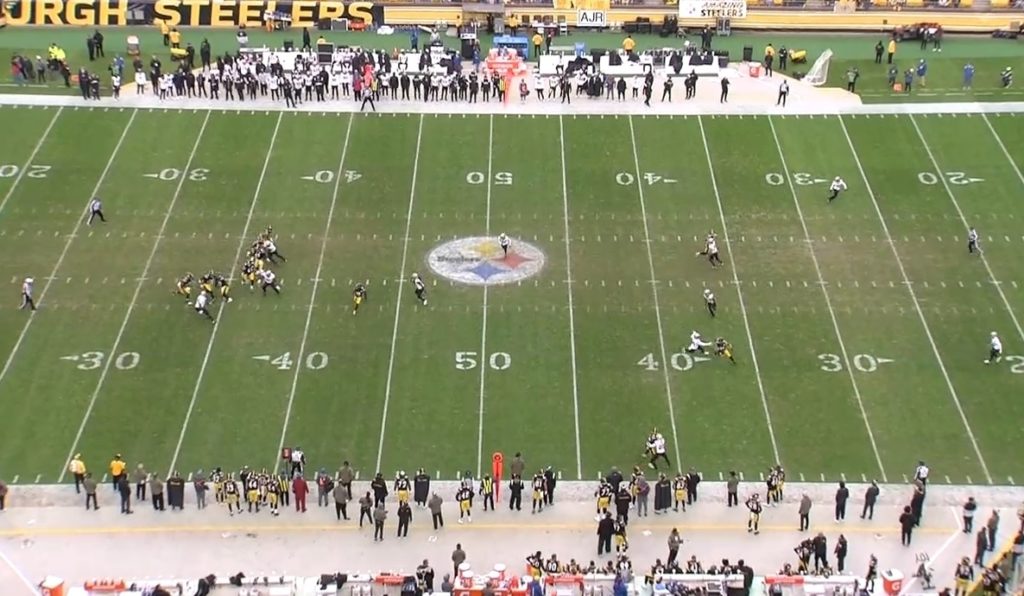 Red zone sack. Always a killer. LG Kevin Dotson with poor technique backing up on his “off-body” sack against the 3T. Under Meyer, the rule is to never back up and give ground. Off-body set means you set flat. Here, Dotson backs up and doesn’t have good first significant contact, doubling over a bit on his punch as #93 swims over. Dotson doesn’t bring his feet to slide and mirror and gets beat, allowing interior pressure that creates the sack.

Pickett was looking for George Pickens down the seam on a tight-window throw. It looks like he’s about to throw it but the pressure forces him to bring the ball down and bail. Maybe he still should’ve stood tall and fired but the pressure certainly had an impact. This one is on Dotson, plain and simple.

Lot of sacks when Pittsburgh had numbers. Showing you guys the aerial and end zone views below. Here, you can see Pickett get too frenetic in the pocket. Looking to run left, then dropping way back, then trying to run to his right, then stepping up, and diving and taking the sack.

While it’s a dangerous game to play, George Pickens is looking pretty open as this play extends out in the end zone. But Pickett isn’t looking at anything but the rush and he started running despite not feeling any pressure. This is one of those examples Matt Canada cited of him doing a bit too much and taking a bad sack. It’s on him.

Pretty simple here. RT Chukwuma Okorafor gets walked back on this bullrush by the LDE. Okorafor gets run into Pickett, whose legs get taken out and he goes down. Okorafor just overwhelmed here and his lack of power/strength shows on this rep. This one is on him.