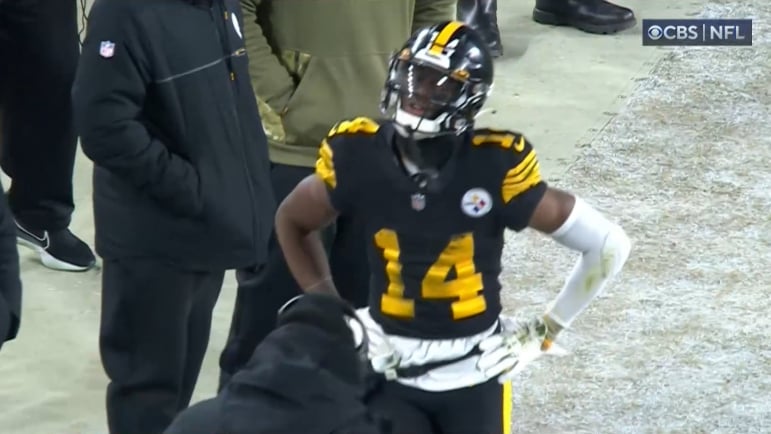 This week had its positives. He was solid in the first half but struggled mightily in the second half. In the first half, he displayed poise and toughness on a couple deep balls completing passes while taking big hits. However there were several missteps as well. He missed seeing Diontae Johnson open on consecutive plays; he threw the ball behind Pat Freiermuth in the red zone and over threw George Pickens when he got behind the defense. Strangely, he was also called for a false start which you don’t see often called on a quarterback.

The flea flicker, which was a questionable call, should have worked. The toss from Najee Harris was offline and Pickett had to side step a rusher. There still was time to get the ball to Pickens who was open deep down the right side.

If Pickett lets it fly after he sidesteps the rusher it may have been a score.

The anticipation isn’t there yet especially over the middle. He could have had a couple completions if he got the ball out before the receiver turns and the rush gets to him. With the play of the offensive line he needs to speed up his decision making.

Here is one of those plays. He has Freiermuth over the middle. If he hits his back foot, hitches up and lets it fly before the tight end turns there are yards to be had.

Pickens had a solid day statistically. His route tree was diverse in the first half but it reverted back to the early season in the second half. He was asked to run deep route after deep route in the second half. In one stretch late in the game he ran essentially the same route on seven consecutive plays. That sequence included his drop down the left sideline. I’m not trying to make an excuse for him but it can be difficult to keep your concentration when you’re asked to do the same thing over and over.

The route tree included a heavy dose of Go/Fade routes (20), comebacks (5) and Dig routes (3). His receptions came on a Curl, Drive, Corner and Fade routes. He was also targeted on Dig route that may have been a route miscommunication and the dropped Go route. He also drew a penalty on a Fade route.

As a run blocker, he wasn’t particularly active or effective. However on Harris’ touchdown he did get in the way enough to keep defenders away.

Heyward was limited to four passing plays on offense. His routes included a Comeback, Out an Up, Shallow Cross and Seam route. The Seam route was his final play in the third quarter and was open and could have been a touchdown.

Pickett initially looks left and draws the safety that way before throwing right. If he had gone right to left he may have been able to hit Heyward.

He was involved in one special team tackle on a kickoff late in the second quarter. He combined on the tackle with Marcus Allen.

Coming down inside the right numbers you can see Heyward bounce off two blockers to get in on the tackle.

Warren suffered a hamstring injury early in the first quarter. He was limited to just three snaps on offense. His first was the third play of the game and was tasked with pass protection. Play number two was as a lead block decoy to the outside on the shovel pass to Zach Gentry. His third snap he ran a quick Out from the wing. He caught the pass and turned up field adding six yards before being injured on the tackle.

His availability for week 12 in undecided at the moment.