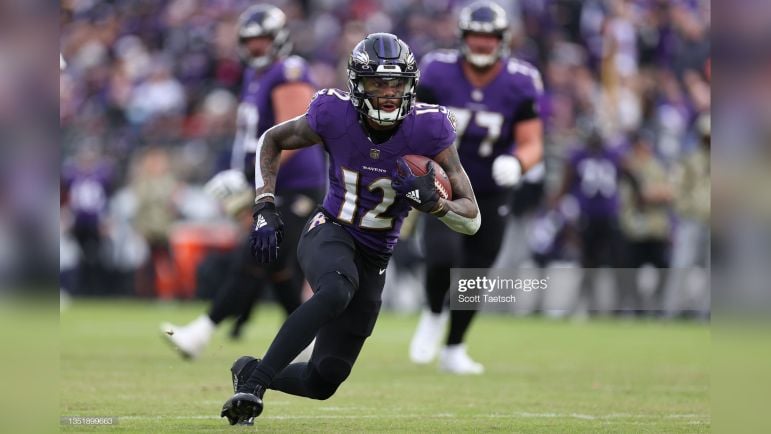 The Baltimore Ravens will be without WR Rashod Bateman for the rest of the 2022 season. Head coach John Harbaugh told reporters Thursday Bateman will undergo foot surgery due to a Lisfranc injury that will end his sophomore year.

“Rashod Bateman had decided to get surgery for his foot,” Harbaugh told reporters as shared by the team’s Twitter account. “It was one of those ones where it was up to him. He and his agent and his family talked it over and they decided it’d be in his best interest to do that. We support him on that.”

Bateman, the team’s 1st round pick a year ago, had been battling a foot injury for weeks and attempted to push through in Sunday’s win over the Tampa Bay Buccaneers. But after logging just 13 snaps, he left the game due to the injury. Now, he’ll be out for the rest of the season, including the Ravens’ two games against the Pittsburgh Steelers.

It’s a sour end to a tough season for Bateman, limited to just six games while limited to rotational action in all those appearances. He never logged more than 70% of the offense’s snaps in any game he played in. Bateman ends the season with 15 receptions for 285 yards and two touchdowns. Injuries have been a theme of his early NFL career, missing the front half of his rookie season due to groin surgery.

He entered 2022 as the Ravens’ top wide receiver but injuries haven’t allowed him to work in that role. For the second straight year, Baltimore’s offense is dealing with several injuries. TE Mark Andrews hasn’t been healthy in weeks while RB Gus Edwards has battled a hamstring pull and RB J.K. Dobbins, who missed all of last year, landed back on IR with another knee injury.

After trading Hollywood Brown on draft night coupled with Bateman’s injury, the Ravens’ top wide receiver this season has been Devin Duvernay. Bateman aside, Duvernay and Demarcus Robinson are the only wideouts to catch more than ten passes this season.

The Steelers will host the Ravens in Week 14 and then travel to Baltimore in Week 17. The Ravens currently lead the AFC North at 5-3.