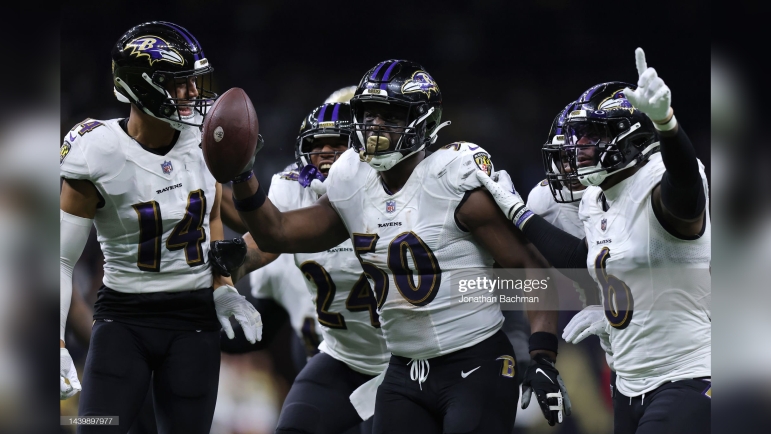 The Baltimore Ravens’ ability to get after the quarterback and get him onto the ground has gone through a period of ups and downs in recent years. We could see that being revitalized in 2022, and not by their shiny young first-round pass rusher, but by their grizzled veteran whom they seemingly retained only as an afterthought this year.

Justin Houston had missed a stretch of games earlier in the year due to a groin injury, but he has been by far the Ravens’ most active and productive pass rusher when he has been on the field. He recorded two and a half sacks last night, in addition to picking off a pass, in Baltimore’s third straight win, retaining outright control of the AFC North.

In fact, it was his third consecutive game with two or more sacks, marking the first time in Ravens history that any player—including former Defensive Player of the Year Terrell Suggs—achieved such a feat.

He now has 8.5 sacks on the season, out of the 27 the Ravens have as a defense, ranking tied for the fourth-most sacks in the NFL thus far. Considering they were seemingly hesitant to even bring him back this offseason, he’s certainly outperforming expectations. Not bad for somebody who nearly retired this offseason.

Baltimore employed the rarely-used unrestricted free agent tender on Houston back in May, the details of which you can read about in the article linked below. Essentially, it allows a player to sign with any other team up until a certain point just before training camp, at which point if unsigned he can only play for the team that tagged him, the tag amount valued at 110 percent of his prior-year salary.

Soon to turn 34 years old in January, Houston has been a well-decorated edge rusher in his time, but it was fair to question whether or not he was at or near the end of his career. He only had four and a half sacks in 15 starts for Baltimore last year—the same amount he has had in the past three games.

And yet Odafe Oweh has all of one sack on the season. The 2021 first-round draft pick out of Penn St. has just 29 tackles, four for loss, and all of five quarterback hits for his efforts, in spite of the fact that he has played a high volume of snaps.

Houston’s return and high level of performance has seen the Ravens strip away some of his playing time. With Tyus Bowser also making his 2022 debut after ending last season with a torn Achilles, and the impending return of 2022 second-round pick David Ojabo from the same injury, it’s possible that Oweh loses out on even more playing time.

There is of course still plenty of time for him to develop into a more consistent and better football player. Right now, though, he should have his eyes and ears open, watching what the man 10 years his senior is doing right now.