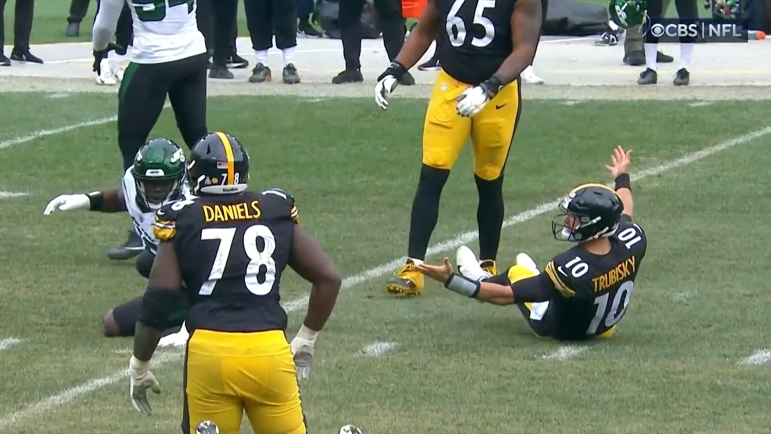 Teams that lose three times as many games as they win tend to have more than one contributing factor to their struggles. The 2-6 Pittsburgh Steelers would be no exception, and their issues are not ones that typically lend themselves to easy fixes. Certainly the expectation for a dramatic turnaround this season feels far-fetched.

There is a general dearth of top-to-bottom talent on the roster, and at key positions, a remark that includes in its scope developing talent that is not yet fully mature. That is especially true of the quarterback position; we don’t know where Kenny Pickett will wind up, but we do know he’s not now where the team needs him to be.

Nor is the offensive line, which Pro Football Focus cites as the biggest weakness on the Steelers’ roster. They ranked Pittsburgh’s 53 as the 28th-best in the league right now—which is not too favorable. The only teams behind them are the Chicago Bears, the Carolina Panthers, the Detroit Lions, and the Houston Texans. Brad Spielberger writes of the offensive line:

Offensive line. Signing James Daniels in free agency appears to have been a sharp move, with his 70.2 grade ranking 14th among guards. Beyond Daniels, it’s been tough sledding for the Steelers up front, ranking 24th in yards before contact per rushing attempt at just 1.1 yards. Their tackles have combined to earn a 62.7 pass-blocking grade, which ranks 25th.

In defense of new center Mason Cole, he has been playing injured for a while now and it’s certainly affected his performance. Prior to injury and taking into consideration training camp and preseason play as well, he was looking like the better signing of the two. Of course, Kevin Dotson’s performance has been a rocky road.

Spielberger does note the defensive line as the Steelers’ biggest strength, in which group he includes T.J. Watt in spite of the fact that he has missed nearly 90 percent of the season. He also mentions Alex Highsmith and Larry Ogunjobi, saying that with Watt’s return, the front needs to “take over games” if they want to win.

No one position has a bigger impact on wins and losses than that of quarterback, however, and Pickett is singled out as the team’s X factor for the second half of the season. It’s as much about seeing how he develops relative to the future as it is about winning games at this point.