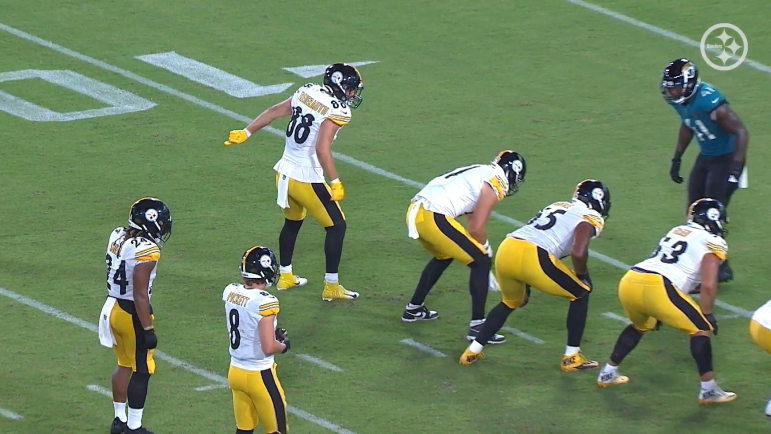 While the Pittsburgh Steelers are an unorthodox 3-7, one bright spot in the season has been the development of quarterback Kenny Pickett. Drafted in the first round, Pickett has the big shoes of likely Hall of Fame quarterback Ben Roethlisberger to fill. While Pickett’s season has been up-and-down, there are certainly signs of improvement week by week. When asked about the rookie quarterback’s development, tight end Pat Freiermuth had nothing but praise according to an interview to Teresa Varley on the team’s website.

“I have seen a lot of growth, especially in the last two weeks,” Freiermuth said about his quarterback. “He is definitely more comfortable in there. He is understanding how the speed of the NFL defense is. He is doing a really good job.”

Indeed, Pickett’s last two games have arguably been two of his best. Coming off the bye week to face the New Orleans Saints, Pickett and the offense scored a season-high 26 points, which they topped the following game against the Cincinnati Bengals with 30. As is usually the case with the college-to-NFL transition for quarterbacks, Pickett needs time to adjust to the speed of NFL defenses. As Freiermuth said, he is doing a better job in doing so.

After struggling with turnovers in his first several starts, Pickett has not thrown an interception in the last two games, showcasing a better understanding of NFL defenses. Against the Saints, Pickett had his first full start without any turnover-worthy throws according to Pro Football Focus. That said, he did have a rate of 4.2% turnover-worthy throws against the Bengals, which was his third-worst of the season.

Aside from receiver George Pickens, Freiermuth is arguably Pickett’s favorite target. If the duo can develop any approximation of the chemistry that Pickett’s predecessor had with his tight end in Heath Miller, the rookie quarterback’s development will be made far easier. Freiermuth played his rookie season with Roethlisberger, and likely knows that traits to look for in a franchise quarterback. His praise for the rookie quarterback is telling, and the Steelers certainly hope to watch the two connect for years to come.

Pickett’s career trajectory will be interesting to watch. On one hand, he is an older rookie at 24 years old, which comes with certain day-one impact expectations that he is arguably not meeting. On the other, he is improving by the week, and has shown flashes of being at least a capable starter. It cannot be stressed enough that it is too early to cast any conclusive judgments on Pickett, and it will be for a while. For now, his development is promising, and it will be telling whether he continues to grow.