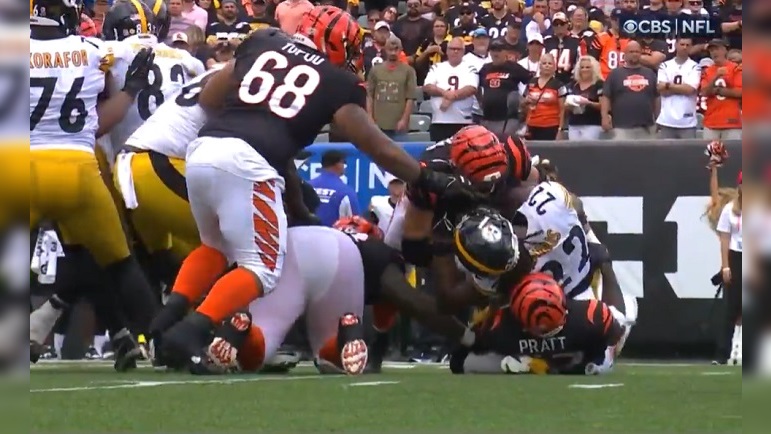 The Pittsburgh Steelers opened the regular season with a win, but it was far from pretty. While the offense was abysmal, the defense gave up what would have been the game-winning score if not for a blocked extra point that forced overtime, and which they could have easily lost subsequently multiple times.

Perhaps no one single aspect in that game was worse, however, than the run game helmed by Najee Harris. A 2021 Pro Bowler, he debuted in his sophomore season with just a 23-yard effort on 10 carries, plus two receptions for three yards (one of which, granted, was for a score).

It was not a pretty game for the former first-round pick by any means, however, and he doesn’t shy away from that on the eve of a rematch against the Cincinnati Bengals and the front seven—including the returning D.J. Reader—that gave him such a hard time. He reviewed his performance in the opener on Friday and shared what he saw.

“A lot of stuff that I could do better, that I should’ve done better”, he said, via a link from the team’s website that is currently dead as of the time of this writing for unknown reasons Maybe it will be back by the time you read this.

“But that’s what film is for, and getting better at practice”, he added. “Us as a team, I think there was a lot of stuff that we wish we could’ve done, too. I think that watching the film, we’ve got a better gameplan of what’s gonna happen this game”.

Overall it was a lighter media session than we have been used to from Harris this year, and not without reason. They are coming off of a win for only the third time all year, and for the first time, it’s a win in which he indisputably played well. He rushed for a season-high 99 yards on 20 carries with a run success rate of 45 percent, which is quite respectable.

It was largely a workmanlike performance but did feature some key highlights, most notably a breakout 36-yard run that marked the Steelers’ first explosive play on the ground all season. Jaylen Warren followed with one of his own, and quarterback Kenny Pickett scrambled for a third, with wide receiver George Pickens adding a fourth on a jet sweep. When it rains it pours, and in all directions.

But back to Harris, it’s worth keeping in mind even though he unsurprisingly declined to mention it that he was still very much dealing with a Lisfranc foot injury. He suffered it early in training camp and basically missed the rest of the build-up to the regular season, playing most of the first half of the year with a plate in his cleat to protect his foot.

That and the lack of preparation obviously affected his performance, but it went beyond that as well. He was displaying a lack of vision, not hitting holes that were open for him—though there were admittedly very few in that particular game—among other issues.

But he and the Steelers are looking to keep that in the past. They are one-for-one coming out of the bye now and are only interesting in keeping what they now have going. They’re certainly in a better place than they were week one, and partially because of what they were able to take away from it.