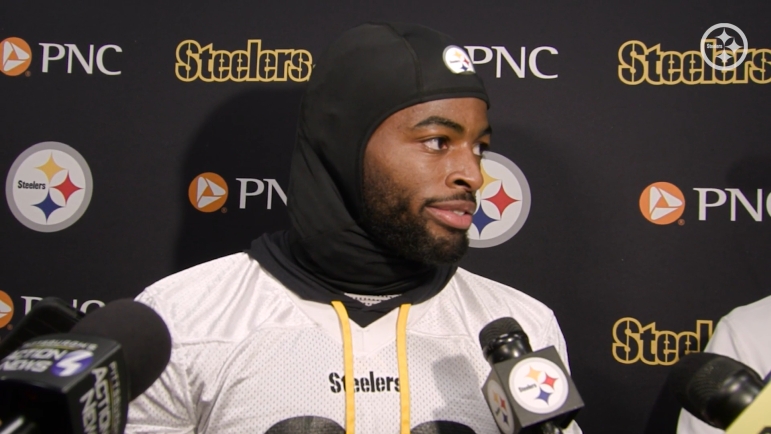 The Pittsburgh Steelers have eight games left in the 2022 season after winning against the New Orleans Saints last Sunday in Pittsburgh. The season hasn’t exactly gone the Steelers’ way thus far as the team sits at 3-6 on the outside looking in regarding their chances of making the playoffs, but the team has seen positive strides in recent weeks.

Coming off the bye, Pittsburgh got key defensive contributors in OLB T.J. Watt and S Damontae Kazee who made big contributions in the team’s last victory. The offense also showed improvement in the running game, rushing for 217 yards against the Saints with RB Najee Harris posting his best performance of the season with 99 rushing yards on 20 attempts.

Harris was asked about the state of the best teams in the NFL and the correlation to the top records and effectiveness at running the football Friday by the media in the locker room. Harris responded that that specific stat makes him excited to tote the rock more as the weather becomes more of a factor down the stretch and got philosophical about how teams should try and run the ball more based on the ongoing trend of the NFL becoming a passing league.

“Yeah,” Harris answered to the media Friday in the locker room on video from Steelers.com. “This weather excites me because it’s time to run the ball again. So, I didn’t know that’s stat though, but yeah, though I feel like through this time and era that we’re in, it’s so much focus on passing that you have a lot of passing defenses out there, a lot of passing defenders out there, you know what I mean? The prototypical linebackers even changed because of the passing. I mean, you got smaller guys, sideline-to-sideline type guys because of how spread-out offenses are.”

When the weather gets cold, snow starts to fall, and the winds pick up in open stadiums like Acrisure Stadium in Pittsburgh, it’s imperative to have a functioning running game to play in the inclement weather. Passing games can be often controlled by the outside elements with winds, rain, and snow actively affecting the effectiveness of a quarterback and the connection he has with his receivers.

Jerome Bettis plowing through Brian Urlacher to score in the snow in his last 100 yard game against the Bears in 2005 pic.twitter.com/nIjy6DZtsp

The running game, meanwhile, can be a great tool to control the clock and bludgeon opposing defenses who attempt to get off the field. Harris recognizes this as a benefit of cold weather becoming more of a factor in the second half of the season. He also mentioned how the league has been shifting to more of a pass-happy league in recent years with NFL teams deploying smaller, more agile defenders at linebacker or in the secondary than in years past to try and match up with passing attacks that stretch defenses down the field and to either sideline.

NFL offenses adapted to a passing game to take advantage of bigger, slower defense built to stop the run in the past, but we are seeing an emphasis by some of the best teams in the league to once again prioritize running the rock to put smaller, faster defenses into a bind. The Philadelphia Eagles, Tennessee Titans, Baltimore Ravens, and New York Giants are a few of the top teams in the league that have put a heavy emphasis on running the football, using All-Pro RBs like Derrick Henry or Saquon Barkley to gash opposing defenses or mobile QBs like Lamar Jackson and Jalen Hurts to threaten defenses with their arm as well as their legs on the ground.

The recipe for playing championship football over the years has often been running the ball well and playing good defense. While the franchise QB is a must to move the offense down the field and score points, the history and stats often back the teams that run the football the best, especially down the stretch. That is what Najee Harris hopes the Steelers will do as well as they build off their best performance on the ground to-date and provide QB Kenny Pickett with a productive running game to make his life easier as the Steelers attempt to revive what has been a stagnant offense.