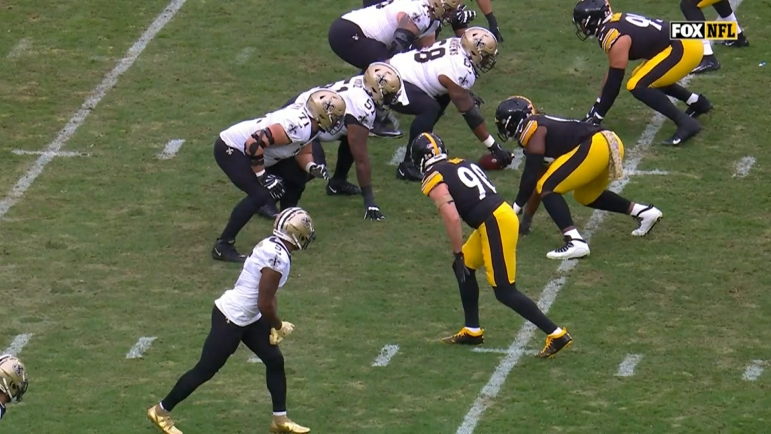 If there was even the slightest sliver of a doubt as to what T.J. Watt means to the Pittsburgh Steelers on and off the field, Sunday’s return to the lineup against the New Orleans Saints should put those doubts to rest.

The return of the reigning Defensive Player of the Year provided a serious spark to the Steelers right away, even before the ball was kicked off on Sunday. Watt’s introduction to the home crowd at Acrisure Stadium sent a shockwave through the stadium, firing up those in attendance as well as his teammates.

Then, right away on the first snap from scrimmage Watt penetrated the Saints backfield and recorded a tackle at the line of scrimmage, setting the tone for the Steelers defense.

"Immediate impact' can feel like a cliché but it's literally true for T.J. Watt. First defensive snap since Week One. Swims the TE, gets in the backfield, helps make the stop. #Steelers pic.twitter.com/QNpthsttFi

It was a sign of things to come for the Steelers as Watt had multiple pressures and drew a ton of attention from New Orleans, opening up opportunities for Alex Highsmith, Cameron Heyward and Larry Ogunjobi up front, leading to a monster day from Highsmith (five tackles, two sacks, forced fumble, tackle for loss) in the win.

Speaking to reporters Tuesday during his weekly press conference, head coach Mike Tomlin stated that throughout his time in the NFL he’s been fortunate enough to be around impactful players like Watt, but added that a player of his caliber’s impact simply can’t be measured, in terms of the boost that player can provide from a confidence standpoint.

“There’s an intangible quality to players like him. They do, they bring more than their presence in their playmaking,” Tomlin stated to reporters Tuesday, according to video via the Steelers official YouTube page. “They instill confidence in those around them. And so that is a very real thing.

“You can’t necessarily measure it, but as somebody that’s been in this business, I acknowledge that it is real. …Thankfully I’ve been around a few. Chances are you’re not gonna have good units unless you have a few. I’ve been a part of some good defenses, man, in my adulthood, since I’ve been at this level.

“And so, I’ve had the pleasure of being around some significant dudes, some defensive player of the year type guys. It’s been an honor.”

Just keep putting tight ends on T.J. Watt and this is what will happen. 🤣 #Steelers #NFL pic.twitter.com/Mrz9clXjAZ

Tomlin certainly has been around some terrific defensive players in his time in the NFL, including the likes of John Randle in Minnesota, Derrick Brooks, Warren Sapp, Ronde Barber and John Lynch in Tampa Bay, and of course guys like Troy Polamalu, James Harrison and Watt in Pittsburgh.

That impact from a confidence standpoint simply can’t be measured. You know it when you see it though, and it was quite clear right away on Sunday that Watt’s presence had the defense juiced up and flying around, leading to a dominant performance against the Saints that featured a second-half shutout.

It’s no real surprise that with Watt on the field the Steelers are a darn good football team, and when he’s out they are one of the worst teams in the league, from a record standpoint. He’s that impactful of a player.