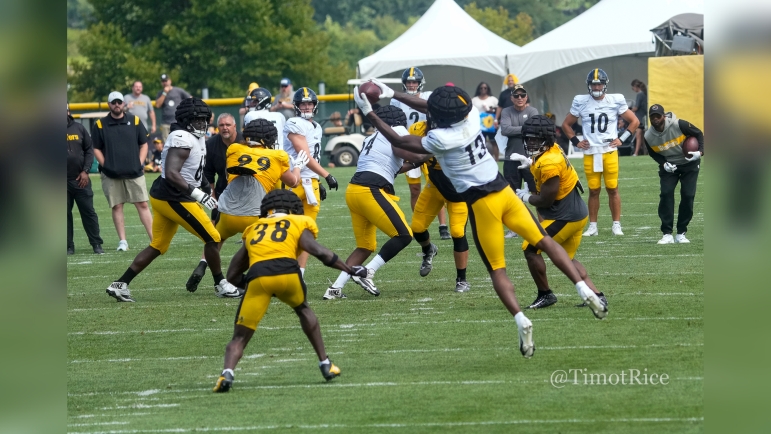 The Pittsburgh Steelers’ offense is going to look a bit different coming out of the bye week. The most notable deletion is WR Chase Claypool, now playing for the Chicago Bears. And while Steven Sims figures to be the next man up to replace him as the team’s primary slot receiver, Mike Tomlin mentioned another name who could see a playing time bump – Miles Boykin.

On his weekly edition of The Mike Tomlin Show hosted by Bob Pompeani, Tomlin said Boykin could work his way into the lineup.

“We feel really comfortable with our depth at the position,” he said via the team’s YouTube channel. “Guys like Miles Boykin whose had a hat every week and had spotty opportunities to contribute on offense. Miles has been one of the core special teams players. But when given an opportunity, he’s been really consistent as an offensive performer so we’re excited about him to maybe get an opportunity to elevate.”

Boykin hasn’t been used much offensively the last two years but over his rookie and sophomore seasons in the league, he averaged 14.5 yards per catch with seven touchdowns, a downfield and red zone threat that shouldn’t be ignored.

As Tomlin mentioned, Boykin has primarily served as a core and strong special teamer this season. Claimed off waivers in April when Baltimore waived him, Boykin has been impressive as one of the team’s starting gunners on the punt team. On the year, Boykin was recorded seven special teams tackles, all solo. According to Pro Football Reference, Boykin leads the team in special teams tackles both total and solo.

Through the first eight games, Boykin had only played 37 offensive snaps this season. He saw action in Week One, getting a deep ball thrown to him early in the Bengals game that fell incomplete while working in heavy personnel packages since, one-receiver sets that leaned on Boykin’s frame and run blocking ability. While a height/weight/speed player, Boykin has struggled to be a consistent downfield threat, something we noted in our summer analysis of his game.

“Boykin had one particularly tough practice early on, struggling to finish plays on go-routes. Truthfully, he didn’t make as many plays downfield as his profile suggests. But his overall play improved. His size helps box cornerbacks out and he found a rhythm later in camp, expected for a guy who is in his first year with the team. Boykin was a touchdown machine, second on the team with six only behind Pickens, and his 19 total receptions ranked fifth on the team.”

Boykin isn’t much of a slot player but if Pittsburgh moves around some of their starting outside guys, like Diontae Johnson, then Boykin could see a bump in playing time. Probably less so than Sims but Boykin will be one of several young and new Steelers looking to put on good tape over the team’s final nine games in order to make a good impression on Omar Khan and Andy Weidl as they build up the roster in the offseason.