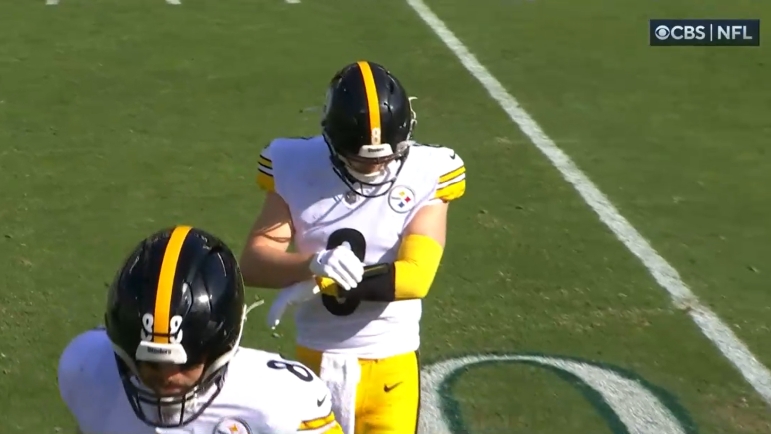 Pittsburgh Steelers quarterback Kenny Pickett hasn’t necessarily set the world on fire since taking over for Mitch Trubisky as Pittsburgh’s starting quarterback. He hasn’t been bad, but he’s had issues with turnovers and not always making the right reads, which isn’t unexpected as a rookie. Offensive coordinator Matt Canada talked today about what Pickett can do to improve throughout the course of the season.

“I think improvement is taking mistakes off the tape that have occurred prior to that. Coach says it all the time, great play is seeing the mistakes before they happen and not letting them happen. Good play is when you see those things,” Canada said via official transcript provided by the team. “I think for Kenny, a lot of quarterbacks that have gotten drafted in the first round have come in their first year and it has maybe not been as rosy as everybody has hoped and it’s turned out to be really good, right? There’s statistical data to that. That doesn’t make it okay right now. We’re not all sitting here like, “Oh, it’s fine,” and he’s not either. We want him to get better every day. We want that for everybody. Kenny is the quarterback and he’s the focal point, but that goes for everybody,” he added.

The Steelers’ offense is just a mess across the board right now. They’re struggling to establish the run and the passing offense isn’t anything special. The total lack of a successful run game obviously puts more pressure on Pickett as the quarterback, and that can be tough to manage as a rookie. Still, the failures of the offense are going to end up being blamed on the quarterback the majority of the time, and Pickett certainly hasn’t been faultless.

The two interceptions he threw at the end of the Dolphins game in Week 7 cost Pittsburgh the game, and while the second interception could’ve been prevented on a better route by wide receiver Diontae Johnson, it was still a risky throw and a play where Pickett would’ve been better tucking the ball and running for a few yards. In general, he’s missed some reads and his placement on some balls could certainly be better. It’s not as if he’s doing worse than Trubisky did to start the year, and it’s good he’s getting reps to help further his development, but there’s definitely areas where he could be better.

I think the improvement will come, too. We’re four starts into the Pickett era, so it’s far too early to make any sort of broad assumptions about what type of quarterback he could be. Given the circumstances, he’s been fine. There are times he should probably be more aggressive and some times where he should be less aggressive, but he’s a rookie quarterback playing on an offense that can’t establish the run and has problems across the board with execution. It’s fair to say that’s he’s struggled a little bit, but it’s not entirely his fault as the situation around him isn’t ideal, either. But the more he plays and the more reps he gets and the more looks he sees, the better he’s going to be.

Heading into the bye at 2-6 is essentially a death sentence for Pittsburgh’s playoff hopes. At 3-5, there’d be a sliver of a chance, but the fat lady is singing somewhere in Pittsburgh right now with the Steelers sitting at 2-6. At this point, the rest of the season should be about development and getting Pickett ready for next year and beyond, as well as ensuring he’s the quarterback of the future for this team. I think he’s going to look better as the season goes on, and hopefully, he can live up to his draft status and be the Steelers’ franchise guy.