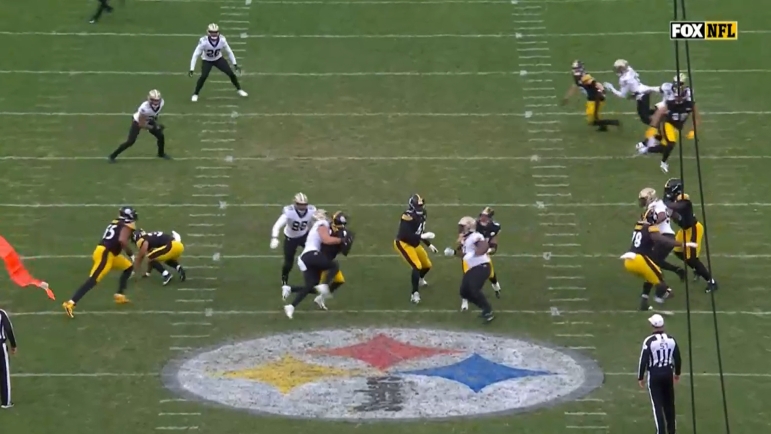 One of the big issues that we were seeing from the quarterback position while Mitch Trubisky was in the starting lineup was the fact that he was showing a tendency to get himself in trouble, rolling into pressure or even taking unnecessary sacks.

There are not a lot of excuses for a sixth-year veteran to be making those mistakes, especially knowing that the margin for error in the offense is so slim. Now that rookie Kenny Pickett is displaying some of the same tendencies to get himself in trouble, it’s beginning to creep into the conversation.

That has especially been the case this week after Pickett was sacked six times. Head coach Mike Tomlin made it very clear in his Tuesday pre-game press conference that “sometimes Kenny gets Kenny in trouble”, but acknowledged that’s part of being a young player.

Offensive coordinator Matt Canada acknowledged the same fact while talking about the offensive line and the pressure that they will be coming up against a Cincinnati Bengals team that has a better pass rush than their sack numbers indicate.

“Those guys are talented off the edge, so we have to block them, we have to have a good schematic plan to protect Kenny and then Kenny’s got to do a good job with the ball,” he said via transcript. “When to hold it and when to throw it. He had a couple last week where he tried to do a little too much and scrambled down in the redzone, might have scrambled back.”

You can certainly chalk up some of the pressures and sacks that Pickett took on Sunday up to either his own doing or at least situations he could have avoided. There are times where he was hesitant to pull the trigger on potentially open throws that led to the Saints being able to get home.

That happens to everybody to some degree no matter how experienced they are, though, and the Steelers and Canada—or at least Canada, since Tomlin sort of did—aren’t making any excuses for Pickett and his contributions to the issue.

“All [these] things that Kenny knows, but again, that’s really easy to say standing here behind a podium versus being the guy out there with all those guys coming after him,” the offensive coordinator acknowledged. “All the sacks aren’t on the line or on the backs, it’s everybody. We’ve got to get open. We’ve got to call good plays. We’ve got to have good schematics. We’ve got to block them. And he’s got to get rid of the ball. So, it’s a group effort.”

Pickett’s sack rate on the season is now up to 8.5 percent, meaning he is taking a sack on 8.5 percent of his dropbacks. That’s statistically significantly higher than Trubisky at this point and ranks as the eighth-highest in the league right now. He’s taken 12 sacks in his last two games compared to just six combined in his first four games, a four-fold increase.