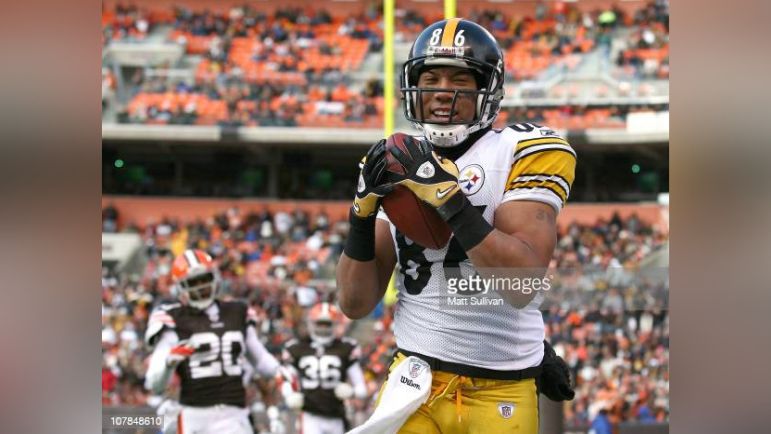 Hines Ward HoF Semifinalist but Outside Looking In

Hines Ward is a semi-finalist in the Football Hall of Fame voting process along with James Harrison. Most sports journalists give James Harrison a better chance to get in on the strength of his defensive player of the year honors and dominance at his position for several seasons. As Dave Bryan and Alex Kozora pointed out during a recent Terrible Podcast, Hines Ward was a great Steelers player but never considered the best wide receiver in the league during his long career. Although he is currently fourteenth in career receptions in the NFL, his 1000 receptions spread over a 14-season career. Hines was a four-time Pro Bowler. But significantly never a first team All Pro. Although, the Associated Press named him second team All Pro three times from 2002 to 2004. A period when the Steelers ran the ball more than passing.

This year, Hines faces six other wide receivers that are Hall of Fame semi-finalists. All were selected higher in the draft than Hines. With three picked among the top six in their respective draft classes. Five of the six were named first team All-Pros at least once. But none were a Super Bowl MVP like Ward.

I decided to extract the game logs for the games that these fellow semi-finalists played games against Ward head-to-head to see how he stacked up.

Anquan Boldin voted to the Pro Bowl three times in his 14 year career. He caught 1076 passes for 13779 yards and 82 touchdowns. Very comparable to Hines Ward with 1000 receptions for 12083 yards and 85 touchdowns. Boldin played in seven games against Hines Ward including a Super Bowl as an Arizona Cardinal and a playoff game as a Baltimore Raven.

Boldin about doubled Ward’s receiving production in the seven games they shared. But the Steelers won two of the most important games with Hines Ward contributing to a Super Bowl win with first downs on two separate scoring drives. Plus, a score to tie a playoff game against the Ravens and a crucial third down conversion on the game winning drive in the playoffs.

Henry Ellard played 16 NFL seasons mostly for the Rams. He caught 814 passes for 13777 yards and 65 touchdowns. He retired the year Pittsburgh drafted Hines Ward, so they never faced each other in an NFL game. Ellard played against Pittsburgh four times, losing three of four.

In three losses, Steve Smith caught 13 passes for 152 yards and no touchdowns:

In those same three games, Ward caught 10 passes for 136 yards.

Neither Ward nor Smith had huge games. But Ward did average 13.6 yards a reception compared to 11.7 for Smith.

Wayne caught 25 passes for 330 yards and a touchdown in five games against the steelers during Ward’s career:

Ward caught 22 passes for 301 yards and three touchdowns in those games:

The most important of the five games was the playoff game following the 2005 season. Wayne did catch a two-point conversion to make the score 21-18. However, he failed to catch two passes targeting him on the Colts final driving leading to a failed field goal attempt. Ward caught a 45 yard pass on third down leading to the Steelers second touchdown. But ward also failed to catch a pass on third down on the drive prior to Jerome Betis fumbling the ball at the goal line.

In two games against Pittsburgh, Holt caught 10 passes for 215 yards and a touchdown:

Hines had 11 catches for 149 yards and two touchdowns.

The teams split the two games with neither being particularly close. Holt and Ward scored all their touchdowns in the 2003 Rams win.

In three games, Johnson caught 18 passes for 168 yards but no touchdowns:

Ward countered with 13 receptions for 179 yards and four touchdowns.

Pittsburgh won two of three of the matchups. In the loss, Hines Ward lone catch was for 19 yards on third and 14 on their own 32. The Steelers would take a 10-7 lead before succumbing 17-10 in ward’s final season.

Hines Ward will likely not be elected to the Hall of Fame anytime soon. But I believe he belongs in the conversation both statistically and for his all around play. He scored more career touchdowns than any of the other six wide receiver semifinalists. His blocking opened up the Steelers’ offensive attack.

A possession receiver, Hines Ward caught at least one pass in 186 straight games. The streak was broken when Bill Belichick successfully challenged a catch that knocked Hines Ward out of the game from a blow to the head. Only four players have longer reception streaks: Marvin Harrison, Tony Gonzalez, Larry Fitzgerald, and Jerry Rice.

I always like to offer a music selection. Hines Ward was always a Steelers fan favorite. But without a convincing argument by Pittsburgh sports media, he will remain on the outside.  Here is Why Don’t You Love Me Like You Used to Do? by Hank Williams