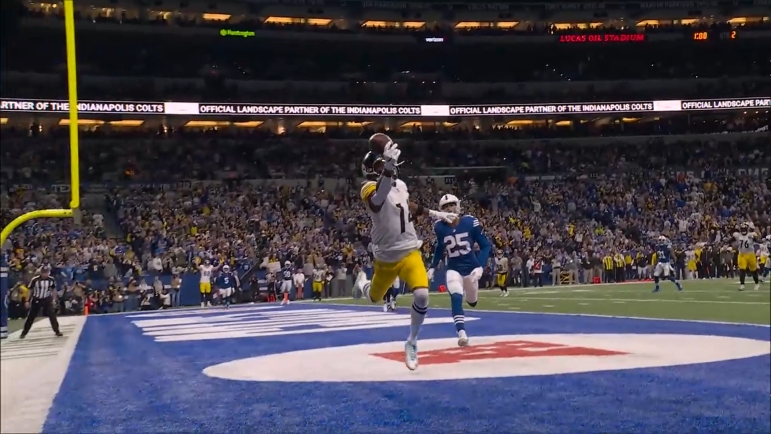 The Steelers are 2-1 in their past three games and scored 30 points in the one game that they lost. By and large, rookie quarterback Kenny Pickett has passed the ‘eye test’—when you actually watch him play, he’s mostly playing decently, if not better, with some very good throws and decisions being made.

According to Pro Football Reference, Pickett is only one of six players in NFL history to attempt 250 or more passes in a season with a touchdown percentage of 1.1% or lower. Of course, he still has six more games to improve that number, but right now he’s in the company of Akili Smith, Andrew Walter, Jimmy Clausen, Trent Dilfer, and Jim Ninowski.

On the plus side, of course, Pickett has also thrown as many interceptions—one—in the past four games as he has touchdowns. He is currently on a 100-attempt streak without an interception, after throwing eight of them on his first 165 attempts.

But the question is, what do we make about the dearth of passing touchdowns? The Steelers only have seven passing touchdowns all season, and one of them was thrown by wide receiver Chase Claypool, who is no longer even a member of the team.

While Pickett has done many things well, his execution in the red zone so far this season has been less than stellar. Even on the game-winning drive on Monday night, before calling the play that got Snell into the end zone, he missed what should have been a relatively easy touchdown to Pickens.

Ultimately, a quarterback has to score touchdowns, and generally high-scoring offenses mix in a handful of explosive-play touchdowns. Those are a lot easier to come by through the air than on the ground—especially in Pittsburgh, which has just one rushing touchdown of 20-plus yards over the past four seasons.

There is nothing saying that Pickett isn’t going to start picking it up and hitting his targets for scores as soon as this Sunday against the Atlanta Falcons, of course, and they did score 24 points this week, with two rushing touchdowns. There have been missed opportunities on the receiving end as well, though that also applies to everybody else mentioned above. But I do think it’s worth noting where his numbers are at this point in his career, with nearly half a season’s worth of play.