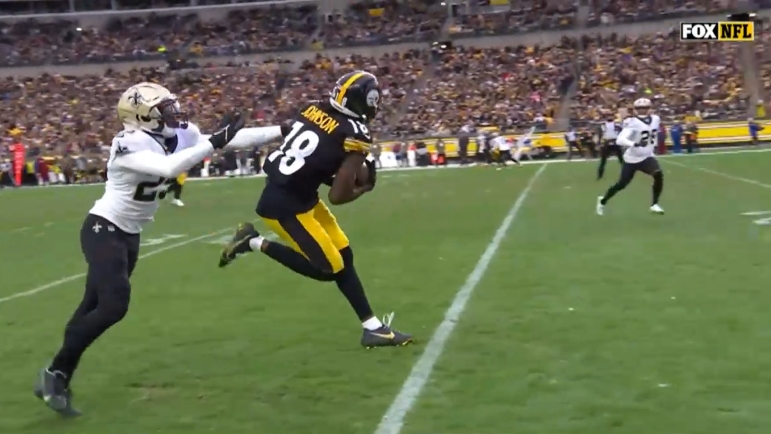 Wide receiver Diontae Johnson has to be the most frustrated person in the Pittsburgh Steelers’ locker room. In the middle of a disappointing year that saw him enter as the team’s #1 receiver that now has him third-in-line behind rookie WR George Pickens and TE Pat Freiermuth, Johnson had an ugly stat line in Sunday’s loss to the Bengals: five targets, four catches, 21 yards.

Speaking to reporters Wednesday, QB Kenny Pickett echoed a suggestion he mentioned in his postgame press conference in order to get Johnson more involved in the passing game.

“We know how great of a player he is,” Pickett said via 93.7 The Fan’s Jeff Hathhorn. “I think if we move him around, don’t keep him in the same spot, that’s a way to get him some more opportunities.”

On the year, Johnson has just 51 receptions for 456 yards and has failed to find the end zone this season after eight trips a season ago. He’s averaging a lowly 8.9 yards per catch, in part due to his YAC tumbling. He’s averaging less than two yards of YAC per reception, a big dropoff compared to every other year. Here’s how the numbers stack up.

Over the last four games, all of which Pickett has started and finished, Johnson is only second on the team in targets, his 29 trailing Pat Freiermuth’s 35. And while Johnson has gotten more looks than Pickens, Pickens has been far more efficient, outpacing Johnson in yards per catch (13.5 vs 8.9) and touchdowns (two to zero).

As Dave Bryan recently tweeted about, Johnson has been miscast in this offense, limited to sideline catches compared to last year when he was used on more slants and go-balls.

30 of the 51 receptions that Diontae Johnson has this season have come via curl, comeback, out or flat routes. Just 19 YAC combined on those and not too surprising. Just 29 of his catches last season came on those routes. ,per SIS #Steelers

To Pickett’s point, Johnson has largely played on the outside. Much of that is expected as the team’s “X” receiver, a role he’s occupied since replacing Antonio Brown his rookie year, but with him struggling, Pittsburgh would be smart to get more creative with Johnson. Putting him in the slot, using more bunch looks, things the Cincinnati Bengals did well to free up Tee Higgins on the way to his dominant performance.

Pickett told reporters defenses are “absolutely” taking Johnson away and forcing him to look towards other options.

On paper, the Indianapolis Colts’ pass defense has done well to keep a lid on things, though they’ve allowed a high completion rate. That speaks to the short passing game being available to Pittsburgh Monday night and with some creativity, Johnson can become a bigger factor in the Steelers’ offense. But that’ll require a conscious choice by the coaches to get him more involved.