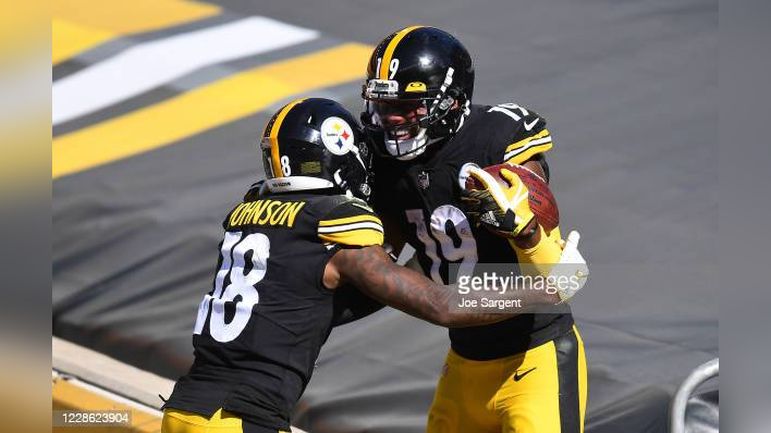 Current Kansas City Chiefs’ wide receiver JuJu Smith-Schuster joined the Block Forever podcast, hosted by former NFL center Ryan Khalil, to briefly talk about his old team, the Pittsburgh Steelers, and the memories he had with the team that drafted him. In the interview, he was asked for his favorite teams to play with in Pittsburgh.

“I would probably have to say like my receiver group in Pittsburgh,” Smith-Schuster told Khalil. “I spent the last five years there and that group was very, very special.”

At times, Pittsburgh had among the most talented receiver room in football. His rookie season room consisted of himself, Antonio Brown, and Martavis Bryant as just about the best top-three trio in the game. Brown was at the height of his career, Bryant was a top-five talent in the league, while Smith-Schuster burst on scene with a fantastic rookie year, nearly touching 1000 yards with seven touchdowns. Add in Le’Veon Bell catching 85 passes and glue guys/role players like Eli Rogers and Darrius Heyward-Bey (who knew how to handle a rookie like Smith-Schuster) and the Steelers had one of the league’s best offenses.

Unfortunately, that group quickly faded away and by 2019, both Brown and Bryant were traded. But the Steelers still had talented rooms, drafting Diontae Johnson to replace Brown and adding Chase Claypool in 2020. A young receiver room had to grow up fast and play beyond their years.

Smith-Schuster also mentioned another player on offense as someone he was close with.

“And also James Connor, I’ll put him in that group. It was a fun time being around those guys.”

Connor and Smith-Schuster came into the league as rookies in 2017, one of the best draft classes Colbert every put together, taking T.J. Watt and Cam Sutton in the same class. Connor had to be a bit more patient, a backup his first year, but he leapt into a starting role when Bell held out for the entire 2018 season. Injuries hampered his career but he bounced back in 2021 with a great season in Arizona. Unfortunately, injuries have again been his story this season, limited to just five games while finding the end zone only once.

The Steelers have been chasing talent and offenses like those teams for several years now. From Ben Roethlisberger’s 2019 injury to an aging and replaced offensive line to nearly a whole new cast of characters on offense, the Steelers now have the NFL’s worst offense. Smith-Schuster has moved on to greener pastures, thriving in the Chiefs’ high-powered offense. After being used as an underneath option his last two years in Pittsburgh, Smith-Schuster is putting up numbers similar to his rookie season, averaging 14.5 yards per catch. Though signed to just a one-year deal this offseason, he’s rebuilt his value and probably will re-up with the Chiefs after this season ends.

And yes, if you were wondering, it’s a slow news day.

Check out the whole podcast below.