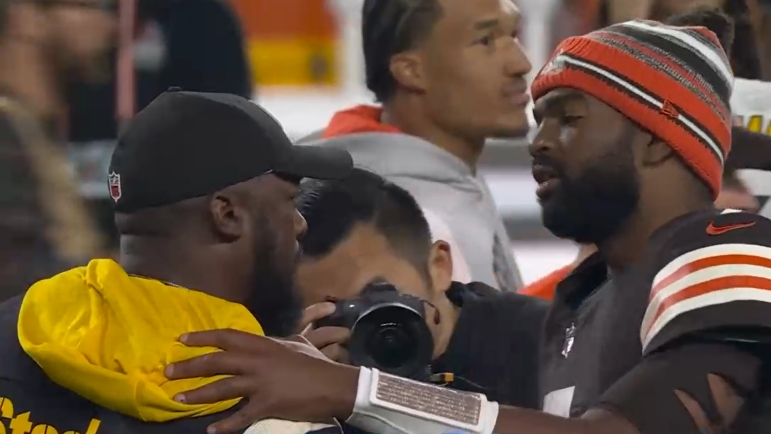 The Cleveland Browns have gotten off to a 3-7 start this season, helmed by quarterback Jacoby Brissett for that run. He was brought in specifically to be a backup and potentially an interim starter for the duration of time that their first option might miss due to suspension.

That time is almost up, as Deshaun Watson is eligible to return to the football field after their week 12 game. Having given up three first-round picks to trade for him while giving him $240 million guaranteed over five seasons, there’s no question about his being inserted into the lineup—even if Brissett didn’t have a .300 winning percentage. But the team has always had his back and has earned their respect.

“The man loves football”, Myles Garrett told reporters. “It’s his team. He loves being here, and he wants to win. It means a lot to him, which really speaks to me”, he added. “It means enough for him to step up there and talk to us as teammates, the coaches, the other staff and everyone involved”.

Watson has already returned to practice for the past week or two, having previously been required to stay away from the team for the bulk of his suspension. His 11-game suspension, you might remember, stemmed from dozens of accusations by various massage therapists of sexual misconduct in the course of performing their jobs, rising to the level of sexual assault.

But he’s theoretically better at football, and that’s what it’s all about. So he is on the cusp of making his ‘triumphant’ return after last playing in 2020 for the Houston Texans, with whom he was a three-time Pro Bowler. Brissett has been a career backup or interim starter, in contrast, but has embraced every opportunity he has had over the course of his career as he prepares for one more start before Watson’s return.

“You guys have to stop saying the ‘last start’ thing”, he told reporters this week following a series of questions about just that—making his last start before he is usurped from the role. “I just want to win. I don’t care who it’s against”.

One of his few wins this season did come against the Pittsburgh Steelers earlier this season, though that hasn’t proven to be much of a compliment, as both teams are tied at the bottom of the AFC North at 3-7 and vying for a higher draft pick at this point.

“Obviously, I envisioned us winning more games, but we didn’t and we haven’t so far”, Brissett acknowledged. “I knew it wasn’t going to be an easy task. I didn’t sign up for easy. I wasn’t brought here for easy, and I knew I was the right person for it. I still believe that I am. I think I’ve shown that”.

Truth be told, coming to Cleveland was about the only way Brissett could have counted on starting, since they were obviously going to need somebody to start games without a commitment to that player being a full-time starter.

He has completed 213 of 331 pass attempts since taking over for the Browns, throwing for 2398 yards with 11 touchdowns to five interceptions. He also has 211 rushing yards and two touchdowns on the ground. He is coming off of arguably his best start, even in a loss, throwing three touchdowns and 324 yards without an interception against the Buffalo Bills.