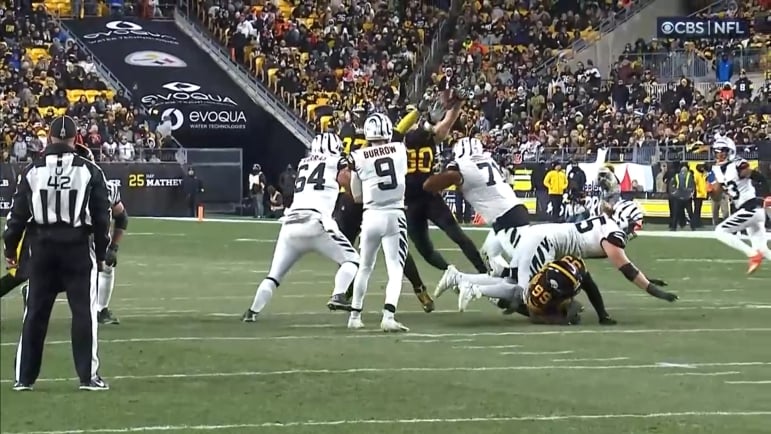 Not every draft class has a clear consensus number one quarterback, let alone a consensus first-overall pick. There was no doubt who would be going number one in 2020, however, when the Cincinnati Bengals were on the clock and quarterback Joe Burrow was coming off of one of the great individual seasons in college football history following an undefeated championship run with LSU.

His rookie season was rocky, but they settled in nicely and made a Super Bowl run last year, hoping to do the same in 2022. They’re now 6-4 after righting the ship early on, yesterday marking their first divisional win in four goes, now 1-1 against the Pittsburgh Steelers. While he may have gotten the win this last time around, however, he’s still 0-for-2 in avoiding outside linebacker T.J. Watt at the line of scrimmage.

Six of the eight interceptions Burrow’s thrown this season have come against the Steelers. Two of those six—one in the opener and now another yesterday evening—were thrown to Watt, who was merely elevating, getting his hands up at the line of scrimmage to get into the throwing lane, only to come down with the whole ball instead.

Watt you think about this play? #Steelers pic.twitter.com/KD81ymnU2B

Of course, there isn’t nothing you can do about it. You can develop your instincts better to sense when Watt is going to elevate and time your throw or redirect your trajectory around it. But it’s not easy to do under any circumstances against a defender with such keen instincts for timing.

I said this in our Steelers Depot group DM chat right after it happened, but I’ve watched football for many years as should go without saying, and I always used to think to myself how incredible it would be if a player actually had the instinctual reflexes to be able to pick off those passes that they’re able to bat at the line of scrimmage. Those plays almost never happen.

Watt has a few of them in his career now, including two this year. It’s really quite remarkable. Certainly fluky as well, but there is also a lot of work and talent that goes into those opportunities to create your own luck.

The reigning Defensive Player of the Year now has six interceptions on his resume along with 36 passes defensed. And that includes plenty of other passes batted down at the line of scrimmage by leaping into the throwing lanes as he did on yesterday’s interception.

Of course, it’s a lot easier for Burrow to sit back and admire the impressive feat of his opponent after a win. Watt isn’t going to care about that play today because it didn’t produce a win. But it was a hell of a moment all the same that speaks to the level of talent that he is.