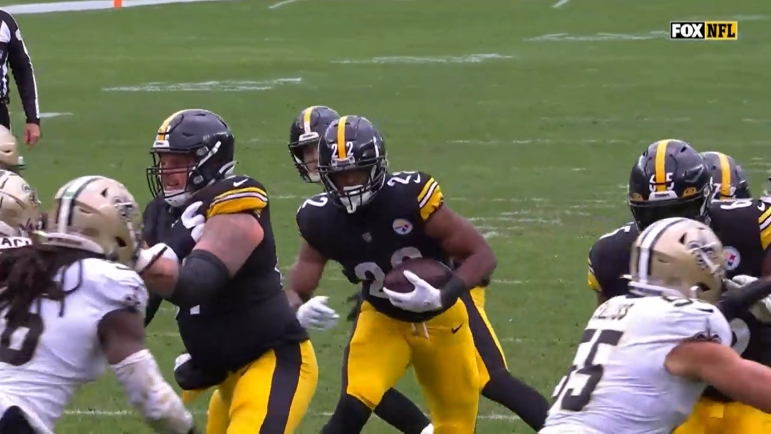 For the first time all season, the Pittsburgh Steelers running game got going in their 20-10 victory over the New Orleans Saints in Week 10. The team ran for 217 yards, with Najee Harris running for 99 yards and Jaylen Warren contributing 38. After the game, Warren talked about how it felt to get the run game going.

“It feels good. I always try to run off Najee, Najee’s usually the tonesetter, he gives me tips. When I go in I always ask him beforehand because he starts off the game, cause obviously he starts off the game, gives me these little tidbits and you just go from there. It’s good to feed off each other,” Warren said via a video posted to Steelers.com.

Warren was also a factor in the passing game, with three catches for 40 yards through the air. Both he and Harris were a factor for the Steelers today, with the two of them complementing each other throughout the game. It was the first time all year we saw the run game really work as intended, and it was fun to watch. For a team that’s struggled so much on offense and is playing with a rookie quarterback in Kenny Pickett, having a successful run game is huge to take the burden off Pickett and help control the game.

Controlling the game is exactly what the Steelers did today, as they possessed the ball for over 17 more minutes than the Saints while running 34 more plays. That’s what can happen when you have a run game that averaged five yards per carry. With Harris picking up 4-5 yards on first down, the offense faced a lot of third and short and Warren, Pickett or Harris were able to convert on the ground or through the air a few times. The offense just runs a whole lot better when the run game is working.

Before the year, if you asked what had to be done for the Steelers to be successful this year, the consensus was they would need to dominate on defense and win with the run. The defense has been spotty at times but generally hasn’t been a problem. Running the ball well is something they haven’t done this year, and as a result they have one of the worst offenses in football. But today was different, and hopefully, it’s not an exception. If the Steelers are able to build off today and establish the run game while playing the level of defense they did, this is going to be a much better football team in the second half of the season.