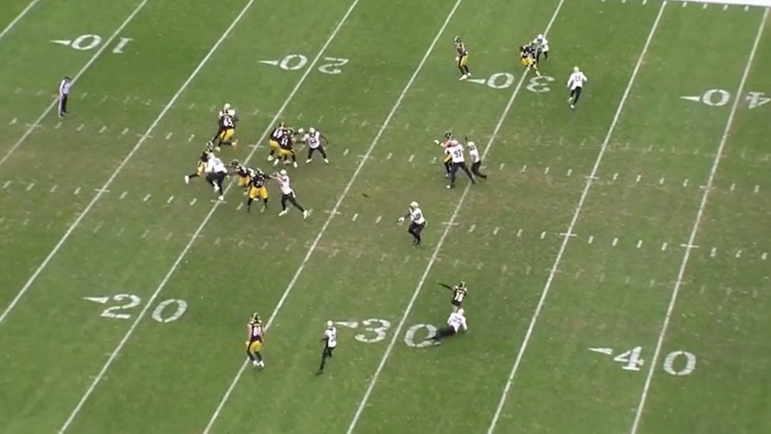 The talk about the Pittsburgh Steelers offense for the majority of the season up to this point has been about how close they are. How they’re just a play or two away, an operation here or there, from putting it all together and having a cohesive unit. Yet here we are nine games into the season and they’ve never put up more than 20 points in a single game.

Part of the problem is that the offense operates with such a small margin for error that only a maximal amount of efficiency is going to get them into the end zone more than twice per game at most. Although it’s not the only component, a lack of big plays has been a primary culprit.

And it doesn’t help any when the rare chances they have at them are stymied by defensive shortcuts, as when the New Orleans Saints this past Sunday opted to draw a defensive pass interference penalty in lieu of allowing wide receiver Diontae Johnson to win clean on a slant route that he insists would have been housed for a long six.

“For sure, it was clear as day it was gonna be a touchdown,” he told reporters yesterday via the team’s website. “But it’s football. You’ve got to live through those moments sometimes, and it’s how you respond to them. But I’m perfectly fine with when stuff like that happens in those situations. I’m just gonna bounce back and try to make another play.”

That particular play to place about nine minutes into the second quarter. Johnson was breaking in on a slant from the right side on 2nd and 9 when the defender held the receiver as he sensed he was going to be beaten. It even appears he grabbed Johnson’s ankle as he went to the ground

As you can see from the all-22 angle, there was nothing but daylight in front of Johnson as the Saints had no deep safety against a five-wide look for the Steelers. If Kenny Pickett was able to get this ball to his receiver, he would have had a 74-yard touchdown, almost without a doubt.

It was a 10-3 game at the time, so that score would have put Pittsburgh up 17-3. That particular drive ultimately stalled at the New Orleans 44-yard line after Pickett took a sack on 3rd and 5 from the 37. Punting the ball away with two minutes to go in the first half, the Saints responded instead with a game-tying score.

It’s plays like that whose absences have been so conspicuous throughout the season. Keep completions have been few and far between. Pickett has only connected on six of 22 passes thrown of 20-plus air yard. He has only 11 total completions that have gone for 20 or more on the season.

Still, his longest completion of the season did come in Sunday’s game, when he found Johnson for a 36-yard gainer on a deep shot late in the third quarter. That came on a 1st and 10 from the Steelers’ own 44 and put them on the Saints’ 20. While they failed to get into the end zone, the field-flipping play still helped them net three points.