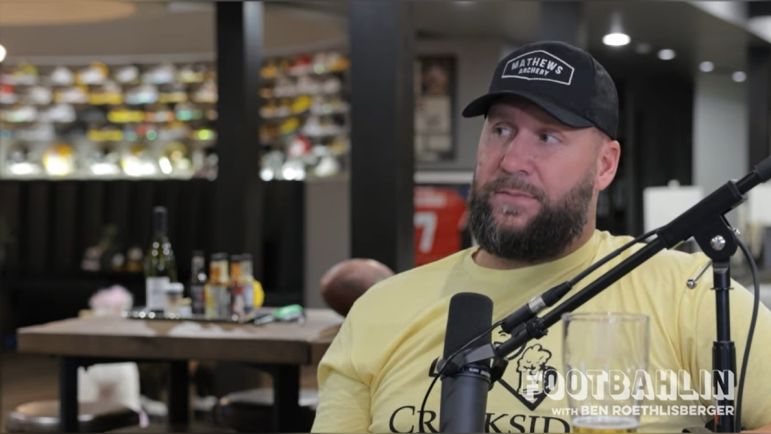 Kenny Pickett hasn’t had the most impressive rookie season for the Pittsburgh Steelers thus far, as he’s won just two games as the starting quarterback. Even then, one of those wins came after Pickett had to exit the game due to a concussion and Mitch Trubisky came in to finish the game off. Despite that, he’s still a young quarterback, and he’s definitely shown flashes of being a guy who can be a solid starter in the NFL, even if he’s been a bit inconsistent. Former Pittsburgh Steelers quarterback Ben Roethlisberger said on the latest episode of his Footbahlin’ podcast that he believes Pickett is going to be a good player in the NFL.

“I thought in that first half especially there were big steps, big strides, I was impressed with the way they were playing. I thought Kenny did a good job at times of taking a shot when he needed to but also throwing it away, using his legs when he had to but not doing it too much. I think he’s going to be good. I think he’s got real, real potential to be a good football player,” Roethlisberger said.

The first half against the Bengals is the best Pickett has played since he replaced Trubisky at halftime of the Steelers’ Week 4 matchup against the New York Jets. He was 14-19 for 141 yards and a touchdown, and he looked poised and confident as the offense put up 20 points in the first half, which tied the most amount of points they’d put up all season up to that point. In the second half, all that went away, as Pickett just couldn’t get into a rhythm and didn’t play well at all. He was 11-23 in the second half with 124 yards, most of which came in garbage time with the game already pretty much out of hand. That sort of inconsistency isn’t unexpected from a young quarterback, but it’s still something you don’t like to see.

Looking at the bigger picture, this season is pretty much all about Pickett’s development and seeing what sort of quarterback he can become. What he showed in the first half is that of a good starting quarterback in the NFL. He showed he’s capable of doing it, and now he just has to put together a full game with that level of play. Roethlisberger’s been around the game a long time and has seen a lot of quarterbacks come and go. If he says that Pickett is going to be good, it’s worth listening to.

Sometimes, it takes quarterbacks over a year to put it all together and show they can start. For Pickett, playing now and getting that experience is only going to help him learn how to read defenses and navigate life as an NFL quarterback while getting a feel for the position. Obviously, the Steelers aren’t going to give up on him after one year no matter how high their draft pick is, and his continued development is going to be the biggest storyline around this team for a while. Hopefully, as Roethlisberger predicts, he’ll develop into a good starter and someone who can lead the next great Pittsburgh Steelers team.