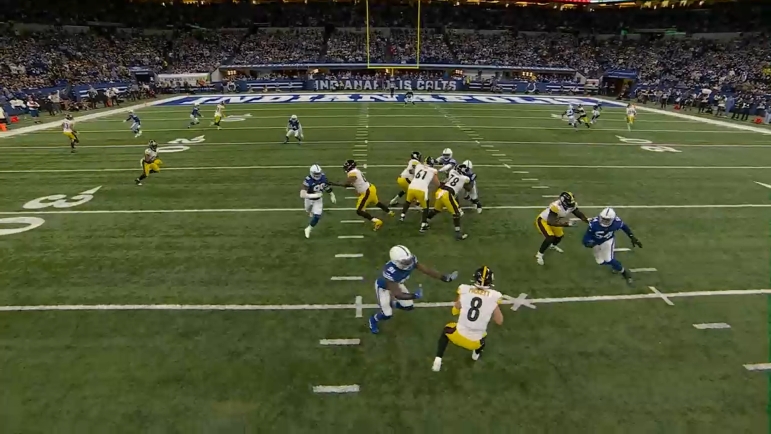 Pittsburgh Steelers quarterback Kenny Pickett is still very early in his career, and he didn’t even throw a touchdown pass, but Monday’s game against the Indianapolis Colts is widely regarded as the best yet that he has played. Even outlets like Pro Football Focus graded him very highly.

But his teammates are not about to blow smoke up his behind. While defensive captain Cameron Heyward was certainly complimentary of Pickett’s game, he also spoke about the areas in which he still has to improve during the latest episode of his Not Just Football podcast.

He is referring to one of the final plays of the game for the offense, on first and goal. Pickens, the rookie receiver, had a clean win on his route fading to the far left of the end zone. Pickett had only to put the slightest touch on his pass for an easy touchdown. He got too much air under it, however, and made it a very difficult play that his target couldn’t finish.

There was that overthrow of Steven Sims on the first third down of the game that led to the opening drive stalling at the Colts’ 27 as well, which Heyward didn’t mention, forcing them to settle for a field goal. But he did talk about that area of the field and another mistake Pickett had.

“One thing we talk about is field goal fringe,” he said. “I think we were at like the 27 or the 29, and we got a sack that kind of pushed us out. And that’s one of those places you can’t take a sack because then it just screws up your field goal range.”

That was on the Steelers’ second drive after a defensive takeaway gave them a short field. They actually got the ball to the Colts’ 24 on first down before Pickett took two sacks. The second came on 3rd and 12 from the 26, losing 12 yards on a play on which he failed to diagnose the rush and hit the hot route.

“Those are the little things that he’s gonna continue to keep learning,” Heyward said, “but I thought he had a really good game, was poised in the pocket, made good decisions, and one thing you love from our offense is when you don’t turn over the ball.”

The rookie quarterback has gone 100 pass attempts without throwing an interception—although he has only thrown one touchdown pass in that same span as well. Still, those will come, as Heyward said, as he continues to keep learning and picking up the finer points of his game. But a lot of people already became convinced last night that the Steelers have something in him.