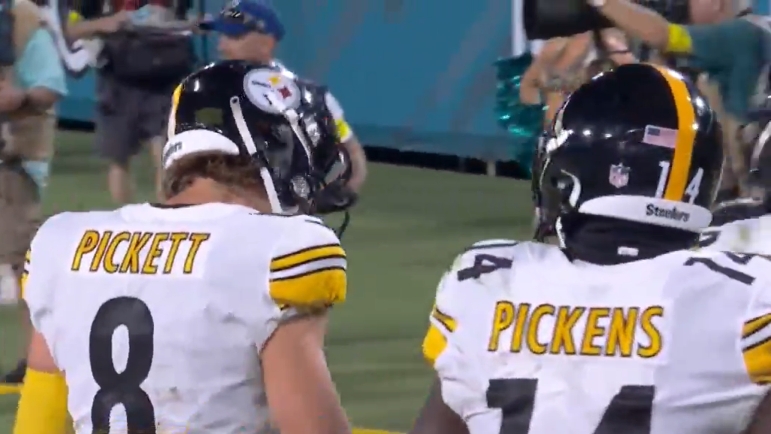 We naturally relate to those who share common experiences. Entering a new profession, or a new level of that profession, is a ready-made opportunity to create bonds, and we see that within rookie draft classes in the NFL.

For the Pittsburgh Steelers, that has most notably been exhibited between their top two draft picks, first-round quarterback Kenny Pickett and wide receiver George Pickens, taken a round later. As their on-field connection grows, though, it’s only catching up to their connection off of it.

Their bond began during the pre-draft process, meeting at the NFL Scouting Combine in February. Even at that time, long before either knew that they would be teammates months later, there was something between them, Pickens told reporters yesterday.

“Kenny was more strictly business. I don’t want to say strictly business, but laid back”, he said of his impressions of Pickett via the team’s website. “He’s somebody not to joke around with. He’s gonna take it seriously. He wants to be great. That’s really the biggest thing. He wants to be great. When I met him then, that’s when I knew. And we didn’t know we were gonna [be teammates]. He didn’t know he was gonna go to the Steelers. But when we linked up it was like old friends again”.

I don’t think there is any doubt that Pickett has that internal drive to be great, not something that I believe is a universal trait throughout those who reach the NFL. even going back to his football camps growing up, excellence in this profession is something to which he has been committed for a long time.

I think that is reflected to a certain degree in his play. While he is far from free of errors, he does show many qualities that belie a level of preparation beyond the typical rookie. The fact that the leads the league in completion percentage when facing pressure is just one small example of that.

Not many players, especially quarterbacks, are instantly great, however. And it must be said that Pickett did inherit a team, particularly an offense, with a lot of issues. The offensive line is still very much a work in progress, and we’re frankly on the verge of a new offensive coordinator after this season anyway.

But the vision seems to be Pickett and Pickens as the nucleus for the offense to come, whatever that may look like. And they share that internal motivation to strive for greatness. Having that at the center of their business operations can only bode well—provided that they have the talent to back it up.