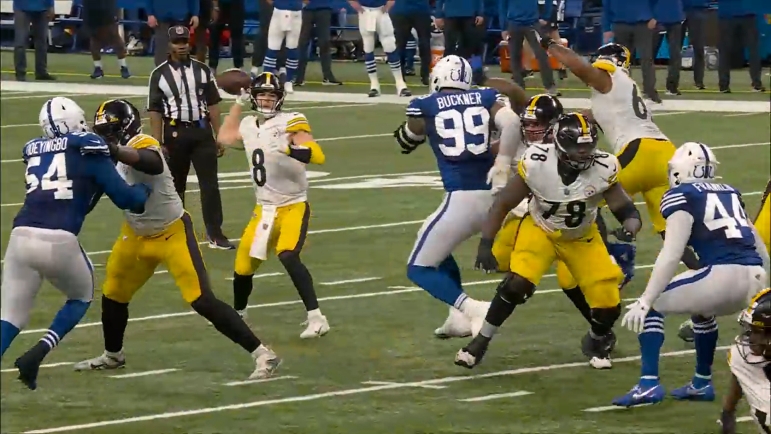 All anyone has wanted to see from Pittsburgh Steelers rookie quarterback Kenny Pickett to this point in his first season in the NFL is a show of growth and flashes of franchise-caliber QB abilities.

Those boxes can be checked after Pickett’s great performance on Monday Night Football in Week 12 against the Indianapolis Colts.

While Pickett’s stats line — 20-for-28 passing, 174 yards and six carries for 32 yards — wasn’t eye-popping by any stretch of the imagination, Pickett’s growth showed in the game with his decision making snap-to-snap, some accuracy showing up in a major way down the stretch, and overall command of the offense in his seventh career start and eighth career game in the NFL.

That performance caused Pickett to rise five spots in the latest NFL.com QB Index from Marc Sessler, pushing the rookie quarterback up to No. 25 overall. With the bump up in the index, Pickett passed the likes of Indianapolis’ Matt Ryan, Atlanta’s Marcus Mariota, Denver’s Russell Wilson, Carolina’s Sam Darnold and Chicago’s Trevor Siemian.

“Pickett played his finest game yet on Monday night. After showing his worth early against Cincinnati in Week 11, the Steelers rookie operated calmly and decisively against a solid Colts defense,” Sessler writes regarding Pickett’s ranking. “Piling up his third straight game without a turnover, Pickett used his mobility to move the pocket and deliver. His chemistry with fellow rookie George Pickens is a promising development with the two hooking up deep and finding each other again on the critical two-pointer that saw Pickett hit his man on the run. Pickett’s a work in progress — still missing a bushel of throws per game — but his aggressive mindset and growing ability to make plays out of structure are positives.”

Pickett certainly turned in his best performance to date, earning a grade of 88.5 from Pro Football Focus in the process. While it wasn’t pretty throughout, it was good enough to get the Steelers back in the win column as the offense overall showed consistency through a full game for the first time this season.

The rookie quarterback made some big-time throws to George Pickens, Pat Freiermuth and Diontae Johnson in the contest and even used his legs to pick up yardage that the Colts were giving him, extending drives or putting the offense in more manageable down and distance situations.

While he still has a lot of growing to do to become that true franchise quarterback the Steelers are hoping for, Monday’s performance was a great sign of what Pickett could be for the black and gold moving forward.