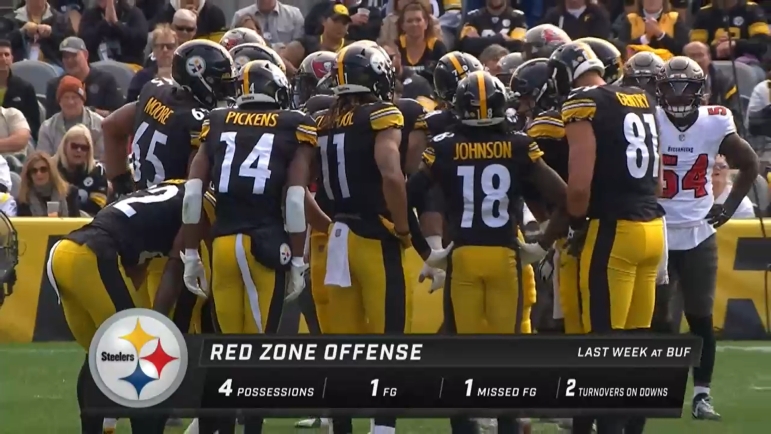 There are plenty of stats to illustrate how tough of a year it’s been for the Pittsburgh Steelers. In very obvious terms, they have the 31st-ranked scoring offense and the 23rd-ranked scoring defense. Doesn’t take a genius to understand you’re not going to have a winning record with numbers like those.

But digging deeper, the numbers that impact those broader figures, the Steelers have been a miserable situational team. On third down, they’re a mess and their offense is as porous as it is in large part due to an ineffective red zone defense. Those are the key three metrics I’m staring at and ones that must improve if Pittsburgh wants to do the same.

Pittsburgh’s third-down offense is as bad as its been since at least 1999, as far back as Pro Football Reference tracks such data. Their red zone offense is the second-worst of the Mike Tomlin era, the only time worse coming in 2019 when they ranked dead last at 35%. And their third down defense is as bad as it’s been since 2002. The conclusion is obvious. Pittsburgh hasn’t been this collectively bad situationally in decades, since the inception of this reliable data-tracking. So it’s no surprise to see them struggle as much as they have over the last two decades.

The only positive situational number is the team’s red zone defense, 6th overall at 48.1.%. Aside from two blowout losses against high-powered offenses in Buffalo and Philadelphia, the Steelers’ red zone defense has done well to keep the score down.

In particular, Kenny Pickett has struggled in the red zone. Of the 36 quarterbacks with 10+ red zone pass attempts, Pickett ranks 36th in QB rating at 62.2. He’s completing just 42.9% of his passes (9/21) with just two touchdowns and one interception. Numbers always need context and receivers haven’t always done him favors down near the end zone but without a run game or the ability to pass the ball when space gets tight, the Steelers are settling for field goals time and time again. Chris Boswell has close to double the number of field goal attempts (16) as he does extra points (nine).

If Pittsburgh can even bump up to roughly average in these categories the next nine games, they can have a finish similar to 2013 or 2006, years where they also started 2-6 before finishing the year 8-8. Such a run under the 2022 circumstances is still probably a bit too strong but a 5-4 or at least 4-5 finish isn’t out of the question which could leave the Steelers feeling a bit better about their future.