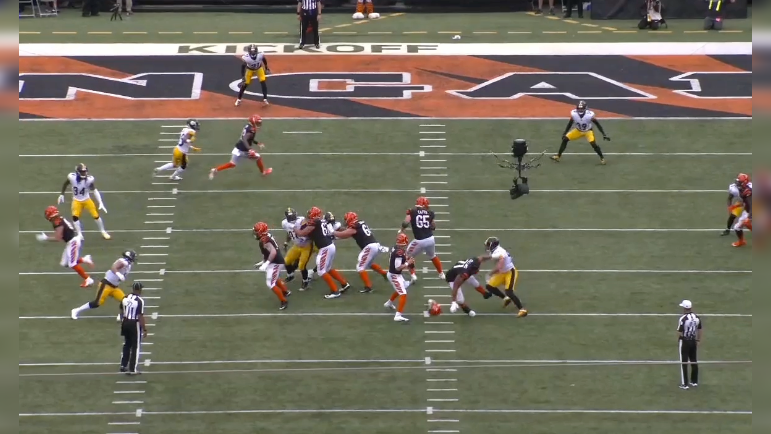 Shortly after the Cincinnati Bengals closed out a 37-30 win over the Pittsburgh Steelers at Acrisure Stadium in Week 11, Cincinnati right tackle La’el Collins — whom the Bengals signed to a lucrative deal in free agency — added fuel to the fire, calling out Steelers star outside linebacker T.J. Watt.

Collins, who has matched up twice with Watt in his first season with the Bengals, stated that Watt was “crying to the refs” all game long, and that he wasn’t worried about Watt at all, instead stating that the reigning Defensive Player of the Year had to line up against him this season.

Watt, of course, is just two games into his return from a pectoral injury suffered in the Week 1 overtime win over the Cincinnati Bengals. While he was pretty good overall in the two games since his return against the New Orleans Saints in Week 10 and the Bengals in Week 11 — which included half a sack and an absurd interception — Collins still had a lot to say about Watt overall after the game.

“T.J. knew he had to line up against me”, he said after the game, via Mohammad Ahmad of Cleveland.com. “Shit, at the end of the day, he was crying to the refs. I’ll see him again next year”.

That comment from Collins certainly raised some eyebrows. It was very similar to the comments former Bengals turnstile/speed bump Bobby Hart had regarding Watt a few years ago after the Steelers beat the Bengals.

“T.J. Watt sucks,” Hart was heard saying coming off the field in the tunnel after game in 2019. Of course, Hart was absolutely destroyed by Watt in their matchups over the years before the Bengals moved on from him.

Now, Collins seems to be trying to pick up the baton for Hart when it comes to Watt, going after him through the media. While former Steelers Depot contributor Daniel Valente put together a clip of Watt dominating Hart over the years after Hart’s comments, I wanted to take a look at Watt against Collins in the two matchups this season, which happened to be the two lowest pass blocking grades Collins received in 2022 from Pro Football Focus — so far.

Against Watt in Week 11, Collins had one of his worst pass blocking grades of the season in this one (45.3), lower than the season opener against Watt (57.5). Realistically, Collins knew he had to go against Watt. He largely had no chance.

Let’s jump back to Week 1 and look at the matchup between Watt and Collins.In the run game, Watt won against Collins with speed, making an impact play right before his leaping interception.

Later on in the Week 1 matchup, Watt created pressure off the edge that caused quarterback Joe Burrow to bail from the pocket and make a play with his legs, throwing on the run to Tee Higgins, who was ultimately hurt on the play. Throughout much of the Week 1 matchup, the Bengals aligned a tight end next to Collins, widening out Watt, making it harder for him to get around the edge.

Still, Watt was able to win here with an inside swipe, knocking Collins’ hands down allowing him to rip around the edge for the pressure. Collins often was caught dipping his head too, which Watt later used to his advantage in the game.

Though this play late in the first half doesn’t lead to a pressure, it’s still a win for Watt, who tosses Collins like a rag doll to the side, allowing him to get his hands up in the passing lane to try and disrupt the boundary throw from Burrow.

It’s a great job by Watt to win right away in the rep with control inside on the chest plate, allowing him to then chuck Collins to the side, leading to the well-paid tackle to end up on his back looking at his quarterback trying to get rid of the football.

Collins had extremely heavy feet throughout the matchup and really struggled to deal with Watt’s speed and hand usage off the edge. It’s a bit surprising that PFF credited Watt with just two total pressures in the Week 1 win because he lived in the backfield. Some of that is due to how quickly Burrow got right of the football, but it’s very clear looking at the tape how dominant Watt was.

This was a clear-cut win for Watt off the edge. Collins got caught leaning, allowing Watt to hit him with an inside club and rip to win off the edge, leaving Collins grasping at air and falling to the turf. It’s worth reminding everyone that rushes like this from Watt led to his season-high 84.8 pass rush grade in the opener from PFF.

The Bengals desperately tried to give Collins help in pass protection by making Watt run farther than normal to try and get to the quarterback. In the end, it hurt Collins. He’s not a great athlete and really played with heavy feet in the Week 1 matchup.

Watt does a great job knocking Collins’ hands down, causing Collins to put his head down and lean, eventually falling face-first to the turf, giving Watt the win around the edge. Burrow again gets the ball out quickly while Collins is left wondering what happened on the play.

This play was unfortunately wiped out due to a hold on Cameron Sutton in the secondary, but it was a definitive win for Watt on the pass rush.

He was able to gain control inside on Collins right away with quick hands and then has the strength to shed and rip underneath, getting to Burrow for what should have been a sack, but instead was negated, giving the Bengals new life on the play.

Should have been half a sack given to Cameron Heyward on the play as well for absolutely bullying rookie left guard Cordell Volson.

Then, on the final rep of the game for Watt, which unfortunately is the play he was hurt on, he had his best pass rush of the day, abusing Collins in the process.

That’s a record-scratch moment for Collins, where you get the caption “You’re probably wondering how I got here” pops up.

Watt was setting up the bull rush all game with his speed up the field. Collins did a good job getting vertical and setting, but Watt caught him in between steps with impressive power, bowling Collins over, knocking his helmet off in the process. It ended up being a penalty on Watt, but as still a dominant rep from the reigning Defensive Player of the Year. Knocking Collins’ helmet off had nothing to do with him clearly winning the rep.

In the Week 11 matchup Sunday, Watt had three total pressures (two hurries and a sack), according to Pro Football Focus, grading out with an 82.4 overall pass rush grade.

Though Watt wasn’t his dominant self, he still had a handful of wins against Collins, and outside of two plays in the third quarter in which he was calling for a holding penalty on Collins and guard Alex Cappa, wasn’t crying to the refs like Collins stated.

Here he does a good job of getting Collins to overset, swimming back inside causing Collins to grab Watt around his waste, slowing him down some. Notice the ducking of the head again from Collins.

It continued throughout the game for the high-priced right tackle.

Watt later did a nice job of knocking Collins’ hands down on the speed rush, getting around the edge to get a hit on Joe Burrow just after he got rid of the football, resulting in an incompletion. That’s a pressure for Watt.

Watt later won inside on a nice counter, combining with Alex Highsmith for half a sack.

Throughout Sunday’s matchup it was noticeable that Collins was trying to set more vertically to combat Watt’s speed rush around the edge. Instead, it left him vulnerable to inside moves, which Watt looked for often.

Again, nice initial kick set from Collins to gain depth, but he just does not move well and had no shot against Watt’s speed, causing him to lunge again and whiff on the block, letting Watt turn the corner and pressure Burrow again.

Notice the ducking of the head as he throws his punch, too, and once he misses is off balance and ends up in the dirt. That has to be concerning for the Bengals to watch.

Remember how I said the Bengals were trying to help Collins by aligning a tight end to his side often in an effort to either chip or widen out Watt? They did it late in the game and it again hurt Collins. He just doesn’t move well enough to cover that type of ground against an elite pass rusher like Watt.

This is one Watt wants back without a doubt. That’s a sack almost every time from Watt. Instead, Burrow is able to withstand the hit and get rid of the football.

Overall, Watt has been very successful against Collins this season, as shown in the film and based on the grades from PFF in the two matchups.

Collins is a fine right tackle, one the Bengals absolutely needed to sign to ensure they protected their investment in Burrow moving forward. But maybe someone needs to get in the young tackle’s ear and tell him not to poke the bear through the media like this. If he needs advice on why it’s a bad idea, maybe he should contact Bobby Hart.