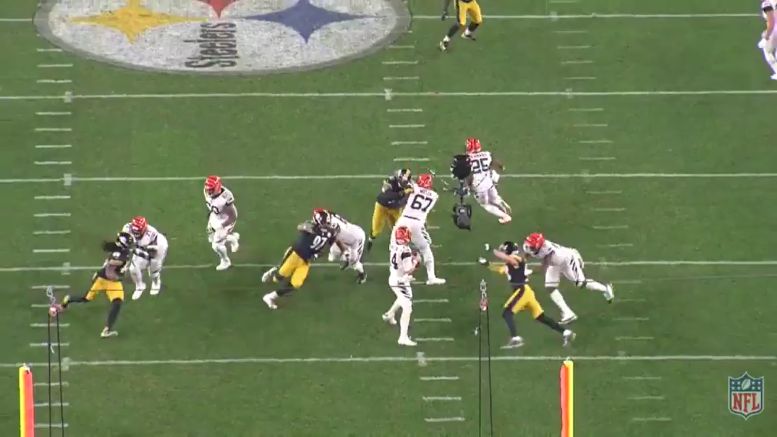 There are those who would argue that T.J. Watt is the best edge defender in the NFL right now. I certainly have no plans of making a counterargument. In his third year, the Pittsburgh Steelers outside linebacker has simply continued the growth that he has shown consistently throughout his career, and it’s culminated into his becoming the first player for the team in nearly a decade to post double-digit sacks two years in a row.

He currently sits in third in the league—first in the AFC—in sacks with 10 and a half, with Chandler Jones ahead of the pack at 12 and a half, Shaquil Barrett at 11 and a half. He has picked up at least a share of a sack in seven straight games, and in eight of 10 games this year, a significant improvement from last season in terms of consistent production.

And today, he gets to face Bobby Hart. Again. The Cincinnati Bengals’ right tackle, who last year was caught on audio declaring that “T.J. Watt sucks”. Our own Daniel Valente has helpfully put together a short collage showing that not to be the case, from the first meeting this season between the two teams.

We’re one day away from seeing T.J. Watt go up against Bengals RT Bobby Hart once again.

Remember it was Hart that said “T.J. Watt sucks” last season. Well, the tape has determined that was a lie.

Watt has 2.5 sacks, 3 QB Hits & 2 FF over his last two games against the Bengals. pic.twitter.com/dIgDXhMqyV

Hart is, in fact, not a good tackle. For example, Pro Football Focus gives him a pass-blocking grade of 60.3 on the season to date, which ranks 49th out of 62 qualified tackles based on snaps played. He is credited with allowing four sacks, three hits, and 23 hurries for 30 total pressures on the season, the eighth-most total pressures allowed by any tackle in the league. He has also been penalized seven times, among the most—though so has Alejandro Villanueva, including four holding penalties in the two games of the week prior to last.

According to Pro Football Focus, again, seven of the 30 pressures that Hart allowed on the season came back in Week Four, the second-most of any tackle that week behind Alex Light. That just so happened to have been the week he played Watt. He allowed two sacks, a hit, and four hurries. Watt was credited with two sacks, a hit, and three pressures in that game, and all of it came from the defensive left side.

So as we head into today’s game, have a heart for Bobby Hart, because it’s probably going to be a rough one for him. Watt has been playing as good as he ever has, and the Steelers have their backs up against the wall with every motivation imaginable to come out and embarrass people today.