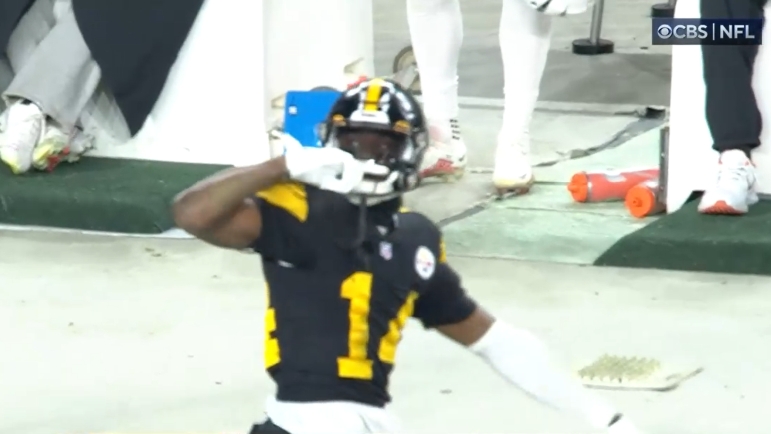 The Pittsburgh Steelers’ hopes of getting the season back on track after winning their first game off their bye week last week against the Saints hit a bump in the road after losing to the Cincinnati Bengals Sunday 37-30. The offense put up 30 points for the first time all season, but still dealt with major inefficiencies in the second half which led to more possessions for the Bengals offense.

One player that helped Pittsburgh hit the 30-point mark for the first time since November 21 of 2021 when they scored 37 against the Chargers is none other than rookie WR #14 George Pickens. Pickens caught four-of-six targets from QB Kenny Pickett in this game for 83 yards and a TD. When watching the game live, you couldn’t help but notice the plays Pickens continued to make as he has flashed various moments during the season. However, there were some mistakes that Pickens also had in this game that kept him from having an even better performance.

Let’s start out by addressing some of the miscues by Pickens in this game against the Bengals and what specifically the young receiver needs to continue to work on as he continues his first season in the NFL. One thing that Pickens has been criticized for over recent weeks is his need for more nuanced route running and better cuts at the top of his route. Here is one example where Pickens runs an in-braking route but tries to push off the defender instead of making a crisp cut to the inside. He gets a step of separation but doesn’t flatten the route and work toward the ball, allowing the defender to come from behind and tip the pass away.

Pickens is normally a sure-handed WR, having vice grips for hands despite a smaller hand size to pluck ball out of the air. However, he had a bad drop in this game coming on this deep ball pass attempt from Pickett where Pickens is running up the sideline, getting a step of separation on the defender. He has the TD in his hands but can’t corral it as he stretches out to make the catch, having the pass fall incomplete.

Pickens had a shot at not one, by two long TDs in this game as the second one came on this stick-and-go concept at the bottom of your screen as Pickens shakes the safety and gets loose deep near the end zone. Unfortunately, he is unable to track the ball as he gets turned around, stumbles, and falls to the ground in the end zone with the ball falling in the back of the end zone for what would have been a 50+ yard TD strike.

Plenty of fans will be frustrated with the missed opportunities for Pickens on the deep ball, but there was more backlash for Pickens after he was ejected for this hit on WR Tyler Boyd on the onside kick attempt at the end of the game. Sure, it was definitely late and uncalled for, but for those saying that Pickens has serious attitude issues stemming back to the news circling around during the pre-draft process questioning his character need to chill for a minute. Yes, Pickens should have stayed up on this play, but the young receiver likely was thinking he could dislodge the ball from Boyd as he fell to the ground while recovering the kick, prompting him to make contact and try and make a play happen.

Still, despite Pickens’ miscues on Sunday, there were plenty of positives to take from his performance against the Bengals. Here is his first reception of the game on a basic comeback route where Pickens should do a better job of working back to the ball with more urgency to get more separation, but still makes the catch while getting taken down from behind.

One route I’ve been wanting the Steelers to utilize more in their passing game is the deep over route which works across the middle of the field. It’s a great zone beater as defenders will latch onto other receivers running though their area, leaving the over often times open with room to run. That is exactly what happens here as Pickens runs across the field from the bottom right of the screen, having Diontae Johnson take the coverage toward him as he gets free past the sticks for the first down before being brought down by the corner who was initially on Johnson.

While Pickens isn’t a burner when it comes to vertical straight-line speed, he can stack corners along the sideline and get loose for the deep ball if you aren’t careful. This will put DBs in a bind, causing them to often resort to grabbing the opposing receiver instead of possibly giving up the big play. That’s what #21 Mike Hilton does here on this rep as Pickens work up the sideline on the slot fade, getting a step on Hilton who panics and grabs him for the PI penalty, resulting in a first down.

This play didn’t count due to an ineligible man downfield penalty on C J.C. Hassenauer but watch as Pickens yet again shows off his body control and spatial awareness along the sideline on this comeback route. Pickens works back to the ball on the pass thrown by Pickett to the sideline and manages to stick both toes in-bounds before falling out. Unfortunately, the catch didn’t count, but Pickens has shown a knack for making these types of acrobatic catches along the boundary throughout this season.

Speaking of acrobatic catches, take a look at this highlight reel catch by Pickens that actually did count on the right sideline where Pickens is covered up by #20 Eli Apple, but snags the ball out in-front of him with Apple sticking his hand in attempt to break up the pass. Pickens manages to hold onto the pass and maintain possession of the catch as Apple attempts to rip the ball out before he goes out of bounds on the 33-yard reception.

While the offensive system hasn’t done the receivers many favors this season in terms of scheming up separation or getting them room to run after the catch, you have to give some credit to OC Matt Canada on Pickens’ TD catch against the Bengals. Pickens lines up outside in a bunch set and runs a corner route to the pylon of the right corner of the end zone, benefiting from the defense getting mixed up in terms of coverage responsibilities. The defender tasked with covering Pickens gets turned around as he cuts toward the end zone, giving Pickens open room for a walk-in TD catch.

It was another strong showing for George Pickens who dealt with his fair share of issues he needs to clean up to execute with better consistency, but still made plays to the tune of another 80+ yard TD performance. Should he have reeled in just one of those two deep pass attempts, Pickens would be sitting pretty with 120+ yards and two TDs on the game. The technical work like releases and flattening of routes needs to be continually groomed for Pickens to reach his full potential as an NFL receiver, but what he has shown us thus far in his rookie season must be considered a success.

This leads me to see Pickens currently as Pittsburgh’s WR1, at least for this season. Sure, Diontae Johnson is technically the WR1 in terms of seniority and financial commitment, but frankly, Pickens has outplayed Johnson on less opportunity this year. HC Mike Tomlin mentioned this week that Johnson helps the other receivers in the room by being the guy opposing defenses focus on in terms of coverage which is true. However, despite being the ninth-most targeted receiver in the NFL this season, Johnson has yielded a 49.4 passer rating when targeted this season compared to Pickens who sits at a 102.2 rating according to Pro Football Reference. In fact, both Pickett and Mitch Trubisky have thrown 0 TD and 5 INT targeting Johnson this season.

This isn’t meant to be a knock against Johnson who is a talented receiver in his own right who showed us what he can do last season as a Pro Bowl-caliber receiver. However, George Pickens has been recognized since the pre-draft process as a WR that possesses alpha WR traits including size, length, athleticism, hands, body control, etc. When comparing the two to other receiver tandems in the NFL, it’s a similar situation to the Seattle Seahawks WRs with Johnson being like Tyler Lockett and Pickens being like D.K. Metcalf. This isn’t to say that Pickens is the physical specimen that Metcalf is, but he does possess a higher ceiling and brings that wow factor like Metcalf does while Lockett is that consistent, steady producer much like Johnson.

Time will tell if Pickens does indeed capture the WR1 title from Johnson in Pittsburgh. He still has a long way to go in terms of his development, but Pickens has shown he is more than capable of reaching those heights. This wouldn’t be the first time a passing of the torch has occurred in Pittsburgh at the WR position with Hines Ward ceding WR status to Santonio Holmes or Mike Wallace to Antonio Brown or JuJu Smith-Schuster to Diontae Johnson. Regardless, in what appears to be a lost season, George Pickens continues to be a bright spot for this team in the present moment and provide hope of what is yet to come.

What are your thoughts on George Pickens? Do you think that he is pushing for WR1 status in Pittsburgh? Do you see Diontae Johnson as the clear WR1, or do you think Pickens will push for that title here in the near future? Please leave