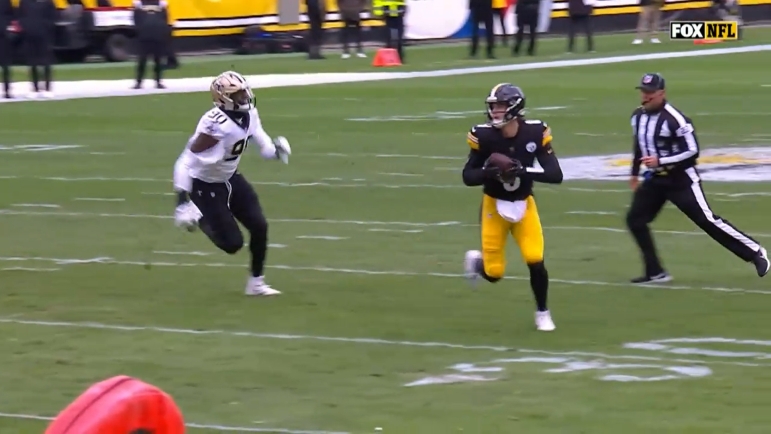 Pittsburgh Steelers quarterback Kenny Pickett came in at halftime of the Pittsburgh Steelers Week 4 loss against the New York Jets, replacing Mitch Trubisky who started the first four games of the season. Since then, Pickett has started every game since, but if former Ben Roethlisberger was running the team, Pickett would’ve just had played his first game in the NFL. On the latest episode of his Footbahlin’ podcast, Roethlisberger said he believed Pickett played too early.

“In my opinion, I didn’t think he should’ve played as early as he did. This would’ve been the first week I would’ve played him. So if they had gone off my advice, he’d be 1-0.”

With a stagnant Steelers offense losing to the Jets at the half and not putting any points on the board, Pickett came in and gave the offense a jolt in the second half, but he threw three interceptions (only one of which was really his fault, though) and the Steelers collapsed down the stretch and lost. With a rookie quarterback, especially one who threw three interceptions in a half, it would’ve probably shattered Pickett’s confidence if the team immediately turned back to Trubisky in Week 5 against the Buffalo Bills.

Once head coach Mike Tomlin made the decision to switch to Pickett, he had to stick with it, and he has. Pickett hasn’t been great, but I’m not sure he’d necessarily be better off right now had he sat behind Trubisky for nine weeks. Before the season, the logical times for Pickett to play were considered to be Week 4, Week 10 or at the end of the season if Pittsburgh was eliminated from postseason contention. Even though Pickett didn’t start Week 4, it was clear that the Steelers felt they could’ve used him earlier this season, and as a result, he may have started before he was fully ready. Waiting until Week 10 would’ve given him the bye week as an extra week of prep, but since he started Week 4, he had the bye week plus four other starts to build off.

I don’t think Pickett’s progressed as rapidly as a lot of people would like, but he did show some progression by not turning the ball over against New Orleans. He did miss open receivers, bail out of clean pockets, and drop back too far against pressure, but he’s a rookie and those things do happen with rookie quarterbacks.

Ultimately, with the way the season and offense were looking, the team pretty much had to make a change. The Steelers are still 3-6, but at least this season can serve as a developmental year for Pickett. No matter what Pittsburgh’s record was, if he was named the starter for Week 10, the Steelers would have had less to go off as far as Pickett’s performance and development when it comes to evaluating him as a future starter than they do now given that he’s started five games and will start the rest of the season.

In the ebbs and flows of a season, teams have to make hard decisions, and playing Pickett as early as they did was one the Steelers ultimately ended up having to make. I think in the long run, it’s a decision that will suit them better than if they had waited to start the rookie.