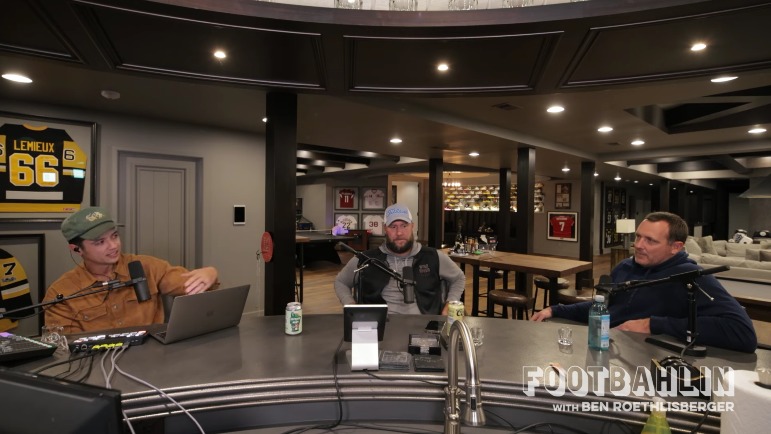 On episode 11 of his Footbahlin’ podcast, former Pittsburgh Steelers quarterback Ben Roethlisberger had one of his favorite targets throughout his career, former tight end Heath Miller on as a guest. Miller, a 2005 first-round pick out of Virginia, was inducted into Pittsburgh’s Hall of Honor on Sunday, and on the podcast, he and Roethlisberger traded stories about their playing career. Roethlisberger told a story about Miller’s penchant for getting open and how he never complained when he didn’t get the ball.

Roethlisberger explained that in the pre-tablet days, players would receive a black-and-white page with the presnap, early snap, middle snap and end-of-play screenshots.

“You just had to look at pictures, it was all on a piece of paper. So that’s what we did for the longest time while we played,” Roethlisberger said.

He said there would be instances where he came off the field on third down and guys would be complaining about not getting the ball and claiming they were open, but upon checking the sheet they weren’t open. When it came to Miller, Roethlisberger said he trusted him and would ask if he missed him on certain plays, and Miller would say no.

“That’s just who he is, that’s who he was,” he concluded.

Miller explained why that was his approach.

“I’ve played quarterback before, so I can appreciate like he said earlier, the amount of information you have to process and everything that’s going on. So if you’ve got five, six guys every time you come off saying ‘i’m wide open, i’m wide open,’ it’s just a lot to process. He’s going to see the pictures,” Miller said. “I know if the look lended itself, you would find me.”

Miller was lauded as an ultimate teammate and competitor during his Steelers career, and the fact he didn’t make things harder on his quarterback lends to the notion of him being a good teammate and putting the team ahead of himself. Miller could’ve been selfish and demanded the ball and argued with Roethlisberger that he was missing him when he was open on weighty downs, but instead, Miller just went about his business and knew that Roethlisberger would eventually find him.

Obviously, having the pictures available helped Roethlisberger see where he might have missed a guy, and so the barking at him from receivers who claimed to be open ultimately meant nothing if he could see the guy wasn’t open. The approach Miller took was one that Roethlisberger appreciated, and the fact that he was open most of the time surely led to him getting additional touches down the line.

Miller was inducted into the Hall of Honor for a reason. On the field, you can make the case that he’s the greatest tight end in Steelers’ history. Off the field, he was a guy who went about his business, was a great teammate, and always put the team ahead of himself. The term “consummate professional” probably gets overused, but I don’t really know how else to sum up Heath Miller. He’s the embodiment of what a Steelers player is on and off the field and a guy that teammates and coaches could rely on. This story from Roethlisberger is just another example of what separated Miller as a player and as a person.