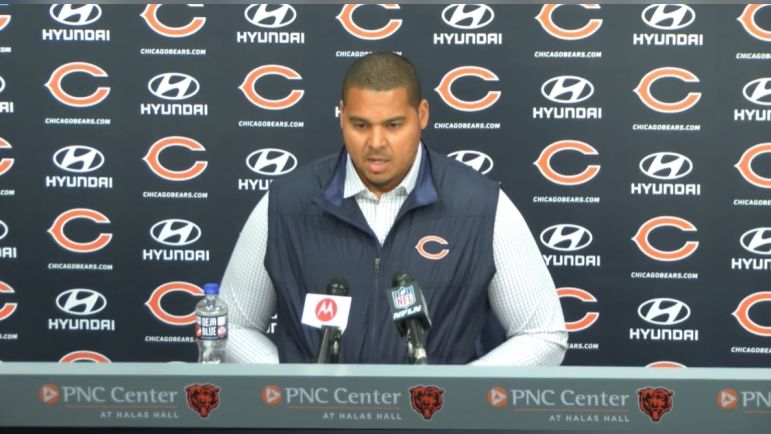 Needless to say, the Chicago Bears are excited to acquire WR Chase Claypool. After trading a hefty second round pick, they better be. Speaking to reporters following today’s deadline, new Bears’ GM Ryan Poles briefly outlined the impact Claypool can have on Chicago’s offense.

“I thought it was important to add another impact player to our offense to go along with the guys that we currently have in the receiver room right now,” Poles said during his presser. “I like the way [QB Justin Fields] is trending and I think adding another big body who’s physical, explosive, great leaping ability, can stretch the field, but also is violent with a ball in his hand as well as a blocker, I think that enhances everyone around him.”

The Bears reportedly made an aggressive move for Claypool, increasing their offer throughout the day until landing him for a second round pick. Poles confirmed the 2nd rounder is Chicago’s own pick, not the one acquired from the Baltimore Ravens in the Roquan Smith deal. That’s good news for Pittsburgh. With the Bears 3-5, odds are strong the Steelers will have the higher pick of the two.

Understandably, Poles is talking up the player he just traded for. But Claypool struggled to consistently show his potential over the last two years, making the occasional big play but not playing to his frame as a receiver or blocker. But as he notes, the Bears’ offense is improving and the front office wanted to give young QB Justin Fields more weapons. Chicago had one of the weakest wide receiver rooms in football.

Claypool could step in as the team’s #1 option and if the Bears can maximize his talent, they will get a big-play threat. In Pittsburgh, Claypool was one of just a handful of options and was stuck in a miserable passing attack that’s thrown only six touchdowns all season, tied for the fewest in football.

Poles said he wanted to make an aggressive move to add another offensive weapon before the deadline. The Bears paid a high price for Claypool but have him under contract through at least 2023. Given what they spent to acquire him, Poles and company better hope Claypool is there longer than that.