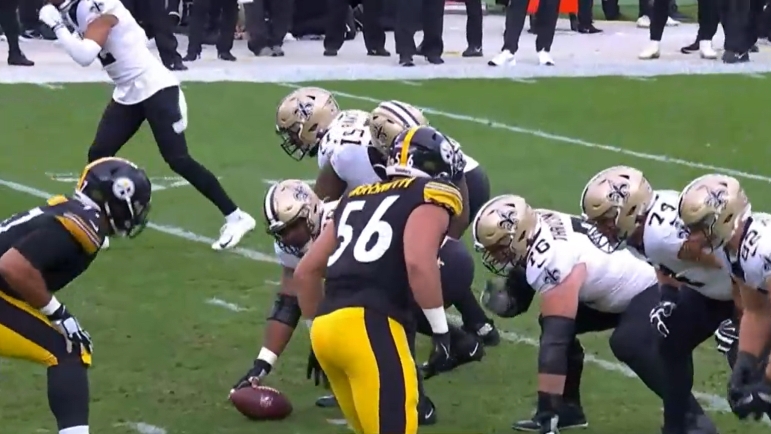 Mastering a spin move can be rather difficult for a pass rusher, and there are relatively few who have managed to make it the staple move in their repertoire. Of course, you can easily rattle off a name like Dwight Freeney at the ready, but for most, it’s more of a counter than the move where they expect to do their most damage.

It’s not a move that current Pittsburgh Steelers sack leader Alex Highsmith is going to pull out of his bag of tricks all too frequently, but the third-year veteran has at this point all but perfected it. He only breaks it out a small handful of times per game, but on a per-rush basis, it may be one of the most effective moves in the league.

He won with it for his first of two sacks during Sunday’s win over the New Orleans Saints, taking down quarterback Andy Dalton for a loss of eight on first down. Unfortunately, it didn’t stall the drive, and in fact, resulted in their only touchdown, but that’s not the fault of his spin move, which he talked about a bit after Sunday’s game.

“It’s kind of a set-up move, so I usually try to work speed, speed, speed, then usually spin inside”, he told Brian Batko of the Pittsburgh Post-Gazette after the game on Sunday. “I can’t do it right out of the gate, because if I do, he’s going to be waiting on it”.

Granted, that sack came against James Hurst, who for all intents and purposes is still a glorified backup who just so happens to be starting, but nevertheless, it was a win against a starting left tackle, and not by any means his first using the move.

While others on the team are able to break it out with success, including T.J. Watt of course, not since Jason Worilds nearly a decade ago have the Steelers had a pass rusher who so prominently features it as one of his go-to moves in critical situations.

As Highsmith discussed, it’s not a move that you can use too heavily, because its effectiveness relies upon its rarity and the element of surprise. You have to set up your opponent during a game, condition him to lean in one direction and be confident that he is committed before you can hit him with the reverse move to the opposite side.

He has previously talked about how he first began working to incorporate the spin move into his repertoire all the way back in 2017, using YouTube videos, which is of course long before he made it to the NFL. He has certainly done a great job of honing his skills in this area to produce a move that is becoming very effective when deployed.